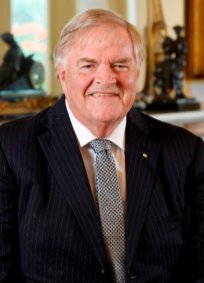 Mr Beazley was born in Subiaco, educated at Hollywood Senior High School and completed two degrees at The University of Western Australia. He served for nearly three decades in the Australian Federal Parliament and for a period of six years as Ambassador to the United States of America.

Prior to becoming Governor, Mr Beazley had a distinguished record of service to the public, leadership and representation of Australia.

Mr Beazley is married to Ms Susie Annus and has three daughters, Jessica, Hannah and Rachel.

Mr Beazley was elected to the Federal Parliament in 1980 and represented the electorates of Swan (1980-96) and Brand (1996-2007).In the Hawke and Keating Labor Governments (1983-1996) Mr Beazley held, at various times, the portfolios of Defence, Finance, Transport and Communications, Employment Education and Training, Aviation, and Special Minister of State.

After his retirement from politics in 2007, Mr Beazley was appointed Winthrop Professor in the Department of Politics and International Relations at The University of Western Australia. In July 2008 he was appointed Chancellor of the Australian National University, a position he had until December 2009.

Mr Beazley took up an appointment as Ambassador to the United States of America in February 2010. He served as Ambassador until January 2016

Australia’s situation in the world

Australia, International Affairs and the Future

Politics and the Future

The Political Process and how it affects you.

Life in Politics – Humorous stories and the lighter side of electoral politics.