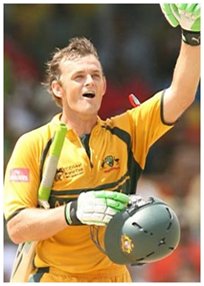 
The recently retired Australian vice-captain, wicket-keeper-batsman Adam Gilchrist is one of the world's most exciting cricketers. Originally from New South Wales, he made his entry to first-class cricket as a specialist batsman but ultimately relocated when it became obvious that his desire to become a first-class wicket keeper would not be realised in his home state. In 1994-95, he duly elected to transfer to Western Australia, where he quickly displaced former international player, Tim Zoehrer. He has not looked back since.
In February 1999 Adam recorded the highest score by an Australian in a One Day Series when he hit a blistering 154 runs against Sri Lanka at the MCG. Adam was also an integral part of Australia's World Cup series triumph over Pakistan in London in June 1999.
Moreover, Gilchrist has had a major impact in both forms of the game, complementing his skills as a gloveman by filling a vital niche as a dashing opener at one-day level and becoming a prolific scorer of runs down the order in the longer version of the game. Many of his performances have been outstanding. Numbered among these, for example, are his attainment of the then highest individual score ever by an Australian at ODI level (in Melbourne in 1998-99) and his pivotal role (in just his second Test, no less) in a match sure to be cast long into the future as one of Australia's most famous ever wins - the victory over Pakistan in Hobart in 1999-2000.
Even though in the early stages of his international career Adam Gilchrist is already being touted as a future champion of the game. He is the first Australian wicket keeper in any form of cricket to open the batting as well as keeping wicket. His skill and leadership qualities were recognised by the national selectors when he was chosen to lead an Australian XI against the West Indies in a first class match in Brisbane and an Australian 'A' team against India in Los Angeles in September 1999.
In addition to his cricket career, Adam Gilchrist has established a media career as a sports reporter for Channel 10 in Perth. He is Vice-Patron of the State Branch of Canteen, a national organisation which assists children and teenagers with cancer. Adam Gilchrist is an entertaining and motivating speaker who regularly addresses both corporate and sporting functions. His presentation addresses topics such as team-building and goal-setting and includes a humorous behind-the-scenes insight into the world of professional cricket. Adam's warm and down to earth style is always a winner and will appeal to a diverse array of audiences as a keynote speaker or guest.