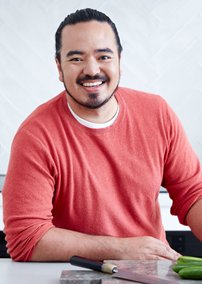 Please pass on our sincere thanks, from all of us at Architecture Media, to Adam for his stellar work MCing our Eat Drink Design Awards last night. He was fantastic and flawless!

“Your heartfelt, engaging speech was wonderful and the feedback from the guests was unprecedented.  Your presence at the dinner was a huge part of its success’.

We had about 460 audience in the lecture theatre, and Adam's talk was absolutely fantastic and engaging.  The podcast recording was also brilliant

Adam Liaw understands how Australian families eat. As the author of six cookbooks, a weekly newspaper columnist and a television host, his approachable and family-friendly recipes are focused on the casual simplicity of modern Australian home cooking.

Born in Malaysia to an English-Singaporean mother and Hainanese Chinese father, Adam’s family lived in several countries through his youth and his culinary influences are far-reaching. He was an active cook from an early age, regularly cooking for his parents and seven brothers and sisters since he was eight years old. His love affair with food and cooking blossomed during his time working in Japan and he returned to Australia in 2009 to compete in MasterChef. In July 2010 over 5 million people tuned in to watch him win the second series MasterChef.

His award-winning SBS Australia television series Destination Flavour is now in its 6th season, exploring the ways in which food and culture relate around the world. He is very active on social media, and you can follow him on YouTube, Facebook, Instagram and Twitter.

Articulate and witty, Adam brings a unique perspective to everything he does. He is a regular columnist for Fairfax - The Sydney Morning Herald, Sunday Life and The Age.  Adam also writes for international publications The Guardian, The Wall Street Journal, Hong Kong, SBS online and popular parenting website ‘KidSpot’.

Adam lives in Sydney with his wife Asami and their son Christopher and daughter Anna. He speaks English, Japanese and basic Mandarin. Between his TV commitments and writing cookbooks, recipes and columns, he makes regular appearances at events and food festivals, and he usually has time to send a tweet or two.
Subscribe
© 2022 Platinum Speakers