Print
Adrian Richardson is in his element at the moment, after 11 successful years of owning and operating his Award Winning La Luna Bistro, a new book launched in late 2008, co-hosting the hit series “Boys Weekend”, which now airs in over 100... 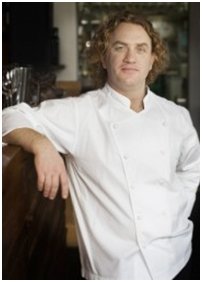 Adrian Richardson is in his element at the moment, after 11 successful years of owning and operating his Award Winning La Luna Bistro, a new book launched in late 2008, co-hosting the hit series “Boys Weekend”, which now airs in over 100 countries worldwide, and finishing his first solo TV series “Secret Meat Business”, he is having the time of his life. Adrian also appeared in a Guest Chef Challenge and Finale episodes of the extraordinarily successful series “MasterChef Australia”.


So what motivates a person who has gained his pilots' license at 16, and whose father was also a pilot, to change tack mid stream and become a Chef? An inherited passion for cooking from his Grandfather could be one explanation, but whatever the reason, Melbourne and its food scene, were the fortunate ones. Adrian Richardson is what you would call a “Quiet Achiever”. His restaurant, La Luna is a successful and bustling place in North Carlton, serving up clean, fresh and innovative food for the past 11 years.
Adrian has a simple philosophy with his food, which he calls “modern Mediterranean”, and that is to use the freshest ingredients and keep it simple. His rule for all his fish on the menu is fresh fish or No Fish! He is so passionate about his food; he ripens his own avocados and tomatoes, makes his own pasta daily, ages his beef on the bone and uses mushrooms that have only been picked hours before arriving at his restaurant. This must be love!
In 2008, Adrian released his first book “MEAT” through Hardie Grant Publishing, and has already been nominated for the best designed cookbook at the Australian Publishers Assoc Design Awards for 2008. In December 2008, Melbourne's Herald Sun included in its “Best Books of 2008” feature. MEAT was given a face lift and re-released in Sept 2009, and his second book is due out March 2011.
In September 2009, Adrian was invited to New York, where he participated in the Taste of Tennis at the W Hotel New York. He then held a dinner at the James Beard Foundation, where he sold out, and was a huge success.
In addition to Adrian's other TV credits, he is also a regular guest on Channel Ten's “9am with David & Kim” and was a regular Chef on Ten's hit TV series “Ready Steady Cook”, for the first three seasons. In 2006 he appeared alongside Tobie Puttock in “Jamie's Kitchen Australia”. Adrian's restaurant La Luna Bistro, even received a personal endorsement from Jamie Oliver himself in front of a live audience of 6000 people, in Melbourne during Jamie's live tour (Sept 2006).
Subscribe
© 2022 Platinum Speakers