A seasoned comic with an ever growing profile, Akmal displays an incredible ability to deal with hot topics in a hilarious and non-offensive way. A sought after presenter in the radio industry, television and comedic stage Akmal Saleh is a comedic personality to liven up any event. 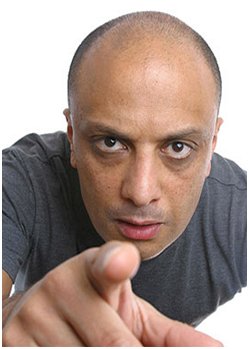 "The pace of skits is furious and the element of surprise great as all performers unveil their individual strengths."
Suzanne Mostyn, Sydney Morning Herald

"The Egyptian - born Saleh has a quick wit and extremely warm persona on stage, his informal banter with the audience makes you feel immediately at ease."
Sacha Molitorisz, Sydney Morning Herald

"Saleh's acutely observed look at life in the low-income, new Australian bracket was a hilarious delight, charmed the socks off the crowd."
Frank Gauntlet, Telegraph Mirror

"An explosion of laughter and entertainment ... set to revive your interest in Sydney's Comedy scene"
Katrina Creer, Telegraph Mirror

A seasoned comic with an ever growing profile, Akmal displays an incredible ability to deal with hot topics in a hilarious and non-offensive way. A sought after presenter in the radio industry, television and comedic stage Akmal Saleh is a comedic personality to liven up any event.

Akmal has toured nationally with Jimeon, Ben Elton, Steady Eddy, The Amazing Jonathon, The Umbilical Brothers and has supported Steven Wright on two of his Australian tours. Being of Arab heritage, his comedy touches on the issues such as Jesus, September 11 and hysterical looks at modern day life in Australia. He has the uncanny gift to walk on stage and instantly have the audience eating out the palm of his hand.

In 1992 Akmal wrote and starred in "All Aussies are Boofta" - a comedy show which enjoyed successful runs and rave reviews at The Harold park Hotel, Parramatta Riverside Theatre and The Harbourside Brasserie in Sydney.

Akmal has written and performed sketches for SBS ("Insight") which culminated in his own TV series 'The 50 Foot Show", which aired on the comedy channel in Australia and New Zealand. He has appeared as a comic actor in Channel Nine's "Just Kidding" and was the lead role in the cult film 'You Can't Stop the Murders' released in 2002 and has performed as a main character in the Murray Wheelan TV movie series for the Seven Network.

Akmal is also sought after in the Radio Industry. He has MC'ed for radio National's "Stand Up Sydney" He has written freelance for both 2MMM and 2 Day FM (Sydney) and is now a regular guest on the JJJ breakfast show with Wil Anderson and Adam Spencer.

He has been nominated for numerous awards including Two Australian Comedy Awards, two a Helpmann Award (an award given for excellent in live performance), and an ARIA award (Australian Record Industry Award) for his DVD "Live and Uncensored".

Akmal is currently writing a book with Random House based on his life living as an Arab stand-up comedian in Australia.