Print
The epitome of the fighting Australian, Allan Border took over the reins of the Australian cricket team when they were at their lowest ebb, and leading by force of will and example, he took them to the threshold of world-champion status. A... 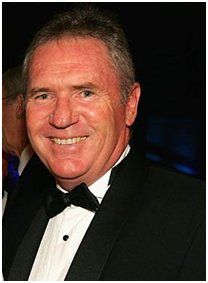 The epitome of the fighting Australian, Allan Border took over the reins of the Australian cricket team when they were at their lowest ebb, and leading by force of will and example, he took them to the threshold of world-champion status. A stern, stoic resister, he was the keeper of his country's flame during their darkest hour. And he ensured that they would be just fine once he left. Unlike most batsmen, Border was at his absolute best when Australia were touring, and when Tests had to be saved.


Allan Border parlayed three shots and a fanatical zeal about not giving away his wicket into the most durable career that cricket in his time had known. At his retirement he had featured in more Tests, more consecutive Tests, more Tests as captain and more catches than any other player - and a batting average of 50 as well. His underused left-arm spin once brought him 11 for 96 against West Indies, and he was also an artful one-day player with a deadly arm from short midwicket.
Not a natural leader, nor a man of frills, he came reluctantly to the captaincy in a dark age for Australia after Kim Hughes' tearful resignation at Brisbane in 1984-85, but eventually applied himself to the task as proudly as to his batting. From the World Cup win in 1987 and regaining the Ashes two years later, Australia crusaded under Border until in 1993 they came within one ball of conquering the world by beating West Indies.
After he retired from Test cricket he played in Queensland's maiden Sheffield Shield win, was named 12th man in Australia's Team of the Century, coached Australia A, and became a selector in 1998. He resigned his post in Trevor Hohns' panel in 2005 in favour of pursuing his media interests, particularly as a pay-television pundit, but he returned a year later to assist the new chairman Andrew Hilditch. Four months after re-joining he suddenly stepped down again due to expanding business commitments. His importance to the game is recognised annually when the Australian Player of the Year receives the Allan Border Medal.
Subscribe
© 2022 Platinum Speakers