Print
A much loved sportsman, Andrew Gaze is considered by many Australians as the greatest ever Basketballer.  A true inspiration to many that have followed in his footsteps and many that have admired his achievements. An engaging and entertaining speaker, Andrew shares his success, motivation and sports journey. 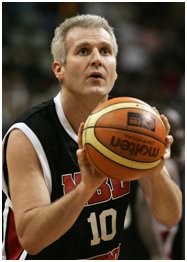 Testimonials for Andrew Gaze AM

Andrew's presentation was terrific. He managed to tailor his talk to suit the requirements of the function, providing interesting stories in regard to his time in basketball as well as some advice for ensuring the right environment is created for sporting excellence. He was particularly well received by those present - the sporting clubs of Frankston.
Frankston City Council

Excellent. Andrew was absolutely brilliant! A more likeable and inspiring speaker you will not find.
Automotive Global Insurance

Excellent. Even though the workshop was a government initiative where the audience was predominantly aimed at a specific Government program target group and the information we provided contained tracts of technical government policy, Andrew was able to grasp the main issues and conduct his presentation focusing on two or three key points that related to the audience and the rationale behind the workshop. Andrew is very genuine person which shines through in his presentations.
Department of Employment and Workplace Relations

Andrew Gaze is a 5 times Olympian. Leading from the front, Andrew has won the National Basketball League (NBL) scoring title a record ten times, and been awarded the NBL's most valuable player Award 7 times.

A recognized leader, Andrew captained his club and the Australian basketball team. He was captain of the Australian Olympic team at the Sydney 2000 Olympics and honored as Australia's flag bearer.

Andrew Gaze is one of this country's true icons and undoubtedly one of Australia's most recognisable and popular sporting identities. In 2002, Andrew Gaze was awarded an AM for his massive contribution to sport in this country.

As a speaker, Andrew Gaze holds an audience in the palm of his hand. At 201cm, he has a commanding presence, but is still one of the crowd and obviously enjoys interacting with people from all walks of life and of all ages. He is a true inspiration.   Andrew Gaze's career highlights are unparalleled in any sporting field. The son of Australian basketball legend Lindsay Gaze, he made the transition to NBL following an impressive schoolboy career in basketball. In his very first season, aged 18, Andrew Gaze averaged 29.1 points per game.

In 1989 Andrew Gaze played for the American University Seton Hall which reached the final four of the NCAA Championships in that year. In 1991, he played professionally in Europe with the Italian club side Udine, becoming Australia's first professional basketball export. Andrew Gaze returned to Australia in 1991 to become the first NBL player to shoot over 1,000 points in a season. In the same year he won the first of his 7 NBL MVP awards, and the first player to lead both scoring and assists statistics. That year, Andrew Gaze was named as one of the 50 greatest players of all time by the international basketball body FIBA.

In 1993 Andrew Gaze realised a long life dream, captaining the Melbourne Tigers who won the NBL Flag. In 1997, Andrew was superb as the Tigers stormed into the finals on the back of a record-breaking 16-game winning streak. Andrew Gaze again led the NBL scoring table and capped off the season by winning his second NBL championship, his 10th NBL scoring title and yet another NBL MVP award.

In 1994, Andrew Gaze made his debut in the NBA with the Washington Bullets. He resumed his NBA career early in 1999, signing with the San Antonio Spurs who proceeded to win the Championship. Andrew returned home with an NBA prized ring.