An interrupted AFL career due to imprisonment, Andrew Krakouer has experienced the highs and lows of life. He now shares his journey and the lessons he has learnt, in an incredibly moving, inspirational way. One of the AFL’s most famous names emotionally opens up about his and his father’s time in jail. 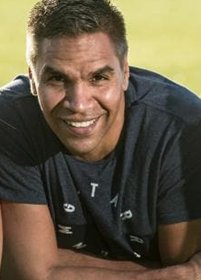 Andrew Krakouer travels from VIC
Fee Range: Up to $5000

An interrupted AFL career due to imprisonment, Andrew Krakouer has experienced the highs and lows of life. He now shares his journey and the lessons he has learnt, in an incredibly moving, inspirational way.

One of the AFL’s most famous names emotionally opens up about his and his father’s time in jail.

Andrew Krakouer, son of North Melbourne great Jim Krakouer, gives a raw and emotional account of his life story, part of which saw him jailed for 16 months for assault in 2008. Krakouer has never shirked responsibility for his actions which led to being jailed, and in In The Game with Damian Barrett, he says: “It’s unfortunate in life, people make the wrong decisions, and at the time they may think it was the right one, that they had no other option,” Krakouer says.

“In hindsight, I look back on mine and I understand whole-heartedly it was through no one else’s actions but my own why I was in this situation, why I got incarcerated.” There were no other factors but my own doing.”

On his first night in jail: “It was a really long walk, really quiet, the hall seemed big, lino on the floor, and once we got to the door, I hadn’t looked up the whole time, and then I heard some keys rattle and in you go. “The door just slammed, and it went clunk behind me and I remember putting my hand on the door and it didn’t move, and that was the reality. It was my home for the next 16 months.”

Andrew Krakouer has felt the highs of football stardom, lived the lows of incarceration and inspired others to overcome adversity. This is his incredible story of love, support, family and determination.

In 2006, he found himself at the centre of an altercation sparked by a multigenerational feud. Krakouer was charged with assault and sentenced to 4 years in jail.

In a blink of an eye, his highlights, hopes and hard work cascaded beneath him, as incarceration saw him delisted from Richmond, separated from his loved ones and stripped of his freedom.

Rather than lament in the pains of prison, Andrew took full responsibility for his actions and made a resolution; to give unwavering dedication to every aspect of his life.

In 2010, after serving just 16 months, Andrew was granted parole and returned to football playing for the District Swans in the WAFL. A testament to his sheer tenacity, that same year, he won every individual award, including the Sandover medal for the league’s best player. He was best afield in the Grand Final that year, amassing 42 possessions, 4 majors including a match-winning goal in the last minute to snatch a fairytale 1-point victory.

Andrew was signed by Collingwood to play in the 2011 season. In a breakout season, he was awarded ‘Mark of the Year’ and finished the season 2nd in the clubs goal kicking tally, including 3 goals in an outstanding Grand Final performance against Geelong.

Within just 2 years, he achieved the unimaginable; from staring at the ceiling of a cell, to starring in the nations biggest stadium. The importance of family, the benefits of a supportive network, and the highlights of winning are the hallmarks that attribute Andrew’s success and resilience; teaching us that resolve can be found even when faced with an unbearable obstacle.

“Just keep the faith. Surround yourself by good people and keep moving forward.”

Whilst football played an enormous part of his life, for Andrew, home is where the heart is. He currently resides in Melbourne with his childhood sweetheart Barbara and their 4 children, who form the bedrock of love, support and passion that drives him to motivate people each day.

An active media personality and motivational public speaker, he is revered as a role model, reflecting in his own words “No matter how bad things get, it can change. The wheel does turn, I’m living proof of that.”

How I turned my life around

My Highs & Lows & the Lessons Learnt