Print
Having multiple roles in Australian television, radio and print, Andy Maher is a favourite media personality.   Since 2015, Andy has co-hosted the hugely successful The Front Bar, aired on afl.com.au and on Channel 7 along with comedians Mick Molloy and Sam Pang where they take a comedic view on news from that week in the AFL community. 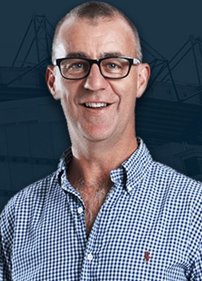 Having multiple roles in Australian television, radio and print, Andy Maher is a favourite media personality. Passionate about the sport he calls, Andrew has had an extensive career spanning over 30 years. Andrew’s knowledge of sport and ability to recall sporting events makes him an entertaining guest speaker and MC at any event.

Andrew Maher is one of Melbourne’s most versatile sports media personalities. Experienced in both radio and television, his knowledge and passion for sport knows no boundaries. Host of Channel 10′s popular AFL program, Before the Game, Andrew has also hosted International Cricket and Golf tournaments, proving himself to be an engaging and professional performer.

In a 30-year career, Andy Maher has been a big player in all forms of sporting media. From humble beginnings of calling Marcellin College’s football games from the sideline, Andy Maher’s sports media career has spanned across more than 25 years in radio, television and print.

Andrew has been working full-time in the football media since the late 80s when he joined weekly football newspaper 'Inside Football' as a staff writer.

He progressed to be the paper's Assistant Editor as well as doing a stint on 'The Sunday Age' as it's Football Editor in the late 90s.

In 1996 he joined television production company Vuecast (now AFL Films) after it landed the contract to supply content for the fledgling Pay TV operator Sports AFL as part of the Optus Vision network. As part of its ground-breaking, Pay TV coverage of AFL football, Andrew mixed duties as host of 'One On One', the station's boundary rider on its exclusive match-day coverage and producer of its oft-praised Monday night show 'Football Feedback'.

He moved on to share Friday night boundary-line duties on Channel Seven's football coverage in 2001 as well as producing the highly-acclaimed 'Talking Footy.'

Since 2002 Andrew has been working as part of the production team responsible for Network Ten's Premiership, award-winning AFL coverage.

From 2013, Maher commentated for Network Ten's coverage of the T20 Big Bash League. In addition to the Cricket, Maher is a roving sport reporter across the board for Ten Sport, including the Formula 1; MotoGP; Golf; Tennis and Athletics (Commonwealth Games and Stawell Gift) among others. Maher continued his hosting duties for popular AFL show Before the Game on Network Ten as well and broadcasting on Melbourne sport radio station 1116 SEN.

Since 2015, Andy has co-hosted the hugely successful The Front Bar, aired on afl.com.au and on Channel 7 along with comedians Mick Molloy and Sam Pang where they take a comedic view on news from that week in the AFL community.

Andy is available for MC and hosting roles when available in his busy television and radio schedule.