Angry is still touring nationally and internationally in 2019 with Rose Tattoo. Angry’s passion is also sharing his experience and advise in his keynote presentations where he shares his message particularly in the area of men’s health of dealing with emotions; depression; general health such as prostate cancer and making sure you have checkups; friendship and the importance of having a secure network; and it’s OK to talk in the open as men! 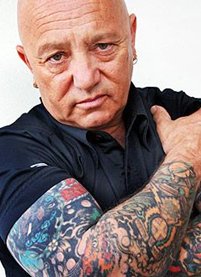 Testimonials for Angry Anderson AM

We had the great pleasure of hosting an engaging and motivating Angry Anderson in Coonamble. Angry addressed the Youth Forum by giving an empowering speech on taking ownership of your own responsibilities and actions. He gave a moving encounter of his life and built it into the overall theme of the forum around ‘community’. Thanks for coming out to us!

Angry Anderson AM travels from NSW
Fee Range: Up to $5000

Angry Anderson is a contemporary Australian icon and unquestionably one of the best-known and most recognised individuals of his generation.

Gary (Angry) Anderson was born in Melbourne, Victoria - growing up on the mean streets of Coburg in Melbourne, the young Angry was obsessed by Rock'n'Roll music and became involved in a number of bands, the best known being Rose Tattoo. Through his activities with these bands Angry is seen as a pioneer of heavy rock music in this country.

Having not done very well at school and suffered teasing for being short, he grew to enjoy being different and to shock people with strange clothes and hairstyles. As with almost everything else, when Angry finally made the move from Rock, he made it a big one. He found himself two new jobs... one in the movies, and one in television as the youth reporter for the Midday Show.

Angry Anderson has always been an outspoken personality whether onstage or off. His candid opinions on subject matters ranging from youth affairs, drug addiction and cultural issues have seen many a head turn when this tattooed, aggressive and in-your-face man made a public stand on any of these issues and became directly involved in debates. This made 1985's move to the youth reporter's gig on the Midday Show (Channel 9 with Ray Martin) a natural. Between engagements with Rose Tattoo he became increasingly involved with making the public aware of problems not only associated with the youth of this time but with people who were not as fortunate as others.

Angry was also passionate about people who were working hard themselves to make things a little easier for kids looking for work, who had left home, were involved with drugs, had terminal diseases or did not know what to do when they had left school.

Angry then moved on to front the Channel 9 current affairs monthly special, The Challenge, which focuses on helping out charities. The Challenge takes on "challenges" which seem impossible to attain, yet shows that, if people are willing to lend a hand, anything can be achieved. Previous challenges include building a playground for handicapped children within 48 hours, providing relief to drought stricken farmers and providing Christmas presents to underprivileged children and granting the wishes of children from The Starlight Foundation.


Angry's biography, “Scarred for Life”, (written by Karen Dewey) was published in 1994 and Angry continues to work tirelessly for many charities and organisations.

Angry’s had a long-term association with the Prince Of Wales Children's Hospital, Westmead Children's Hospital, Ronald McDonald House and Bear Cottage, Odyssey House' Drug rehabilitation program and Oasis - the Salvation Army centre for street kids.  He has supported cancer research, Canteen, Camp Quality, N.A.P.C.A.N, Amnesty, Refugee Week, Greenpeace, ROMAC, The Starlight Foundation and the Make A Wish Foundation. He's been an Australia Day Ambassador, spent two years as President of Children's Week and been a Director on the board of the Foodshare Program.

Angry is still touring nationally and internationally in 2019 with Rose Tattoo due to the great support and interest from his fans.

Angry’s passion is also sharing his experience and advise in his keynote presentations where he shares his message particularly in the area of men’s health of dealing with emotions; depression; general health such as prostate cancer and making sure you have checkups; friendship and the importance of having a secure network; and it’s OK to talk in the open as men!

Angry Anderson takes you into his world of growing up adored by his Mum, but isolated, abused and neglected by his father and broader family. Through his painful journey of teenage years struggling to find an identity and his slow, but determined road to manage and master severe depression which trapped him in a destructive cycle of self abuse.

Angry speaks candidly from his own personal experience including times of depression, what turned him around and what motivates him. His presentation delivers a message of hope and encourages people to take action.

Angry is truly a passionate and inspirational speaker.