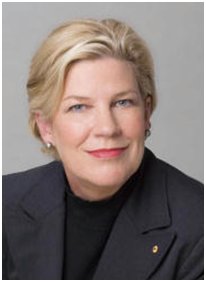 Ann Sherry was the Chief Executive Officer, Westpac New Zealand and Group Executive, Westpac New Zealand and the Pacific until April 2007. Ann was the first female CEO of a bank in New Zealand, and had responsibility for Westpac operations in New Zealand and seven Pacific countries. Previously, Ann was the CEO of the Bank of Melbourne and Group Executive, People & Performance. Ann has been with Westpac for 12 years, and in that time has worked in all key business units.
Ann Sherry assumed the role of CEO of Carnival Australia in July 2007 global cruise company comprising a portfolio of 12 distinct brands comprised of the leading cruise operators in North America, Europe and Australia, such as Cunard Line and P&O Cruises She has also held senior bureaucratic roles in Australian state government in the areas of health, child care, employment and women's policy. Nationally, she led the Office of the Status of Women (1992-94).
Recruited to Westpac in 1994, Ann Sherry commenced a 13-year career with the organization. Her first eight years with Westpac spanned senior leadership roles within the HR and public affairs functions, and working through key acquisitions (including Challenge Bank and Bank of Melbourne).
Ann Sherry's success as Chief Executive Officer of the Bank of Melbourne led to her appointment as Chief Executive of the New Zealand and Pacific banking business. Sherry made a powerful impact in the New Zealand operation, resuscitating the brand in business and retail sectors, as well as turning staff morale around and delivering a real and highly visible Westpac presence in a tightly congested, diverse and participant-rich financial services market.
In addition to her business contributions, Ann Sherry instituted some major cultural initiatives at Westpac - in particular, the paid maternity-leave policy and the focus on women in business, where Westpac became an industry leader. Each of these initiatives had a measurable impact on staff retention and the overall profitability of the business. She has also been instrumental in initiating and delivering an internationally renowned CSR program at Westpac.
Prior to Westpac, Ann Sherry was First Assistant Secretary of the Office of the Status of Women in Canberra. In this role, Ann advised the Prime Minister on policies and programs to improve the status of women in Australia and was Australia’s representative to the United Nations forums on human rights and women’s rights. In 2004 Ann Sherry was awarded an Order of Australia for her contribution to the Australian community through the promotion of corporate management policies and practices that embrace gender equity, social justice and work and family partnerships. In 2003 Ann was awarded a Centenary Medal by the Australian Government for her work on providing banking services to disadvantaged communities.
Subscribe
© 2022 Platinum Speakers