Highly entertaining and hilarious, Anne Edmonds is a comic genius.  Embracing her audiences through story telling with comedy and song, Anne is a must see comedian and speaker. 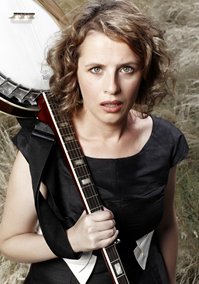 Still laughing the next day simply a fantastic performer

Anne was faultless. A great message for that particular group of kids and they were totally engaged by her presentation.

Anne Edmonds travels from VIC
Fee Range: Up to $5000

Anne Edmonds is one of Australia’s most exciting new stand up, character and banjo playing comedians. She burst on to the comedy scene in 2010 as a national finalist in Raw Comedy (Australia’s premier comedy talent quest) and went on to be nominated for Best Emerging Comedy Talent at the Adelaide Fringe Festival.

Anne has has made several television appearances including Wednesday Night Fever (ABC1), It’s a Date (ABC1) and Backseat Drivers (ABC2).  Anne has also gone viral with her ABC produced video ‘Raylene the racist’ which attracted over 60,000 YouTube hits.

In 2015 she starred on Network Ten’s Have You Been Paying Attention, ABC’s Dirty Laundry Live and supported US podcast and comedy superstar Marc Maron on his Australian tour.

After a sold-out season and a prestigious peer award win at MICF 2015, Anne took her show, You Know What I'm Like, to London’s Soho Theatre in January 2016.

In 2016, she toured her Barry-nominated show – That’s Eddotainment – around Australia, as well the incendiary, award-winning show True Australian Patriots. Eddo has also created, written and will star in her own show for ABC iView, The Edge Of The Bush.