Print
Anthony Minichiello is an Australian former professional rugby league footballer who captained the Sydney Roosters of the National Rugby League.  A strong leader, Anthony shares his passion for the sport through his presentations in areas of leadership, teamwork, health and fitness and overcoming adversity. 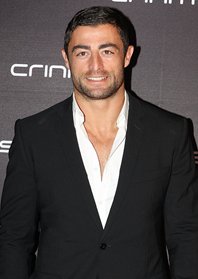 Exemplary is not too strong a word to describe Anthony Minichiello. It applies to his skills as a footballer, his personal brand, his loyalty, his commitment and his career results. Anthony is a shining superstar in the sport of Rugby League in Australia. All of the above values are territories for his presentations that demonstrate a willingness to prepare, train and execute even in the face of great adversity.


Beginning as a young (16 year old) recruit to the Sydney Roosters in 1996, Anthony has captured awards and achievements that others dream to emulate. He remained loyal to that one club for his entire 18 year career concluding in 2014. In that year he was chosen as the ‘Face of Rugby League’ by the NRL.

Anthony won 2005 Golden Boot award as the Best Player in the World. He has played for Australia and the NSW Blues State of Origin side where he scored the match winning try in 2011 that sent Blues fans delirious with joy.

He played in 6 grand finals winning 2 premierships, In 2013, he captained The Roosters to the minor premiership and they went on to win the Telstra Premiership. That year he was also named as the NRL’s ‘Favorite Son’.

These exemplary football skills, loyalty and achievements are only surpassed by his exemplary personal values/brand and capacity to overcome adversity. In 2006, persistent back, neck and ankle injuries looked like they would halt his career. But a determination to succeed led to rebuilding of his body and life.

True grit, determination and belief saw him return to peak form that led to him continuing his journey of a brilliant and fulfilling career and ending on his own terms.

Anthony retired from Rugby League at the end of the 2014 season and is now contracted both to his beloved Roosters club and as an NRL Ambassador, where he continues to represent the sport at the highest corporate level.

Anthony talks with passion all the while peppering his presentation with anecdotes and examples from his brilliant career.