Print
Once in a lifetime, an artist with an extraordinary spirit comes along. One such artist is Archie Roach: poet, storyteller and singer/songwriter of international renown, his songs and performances are poignant, passionate and totally compelling.... 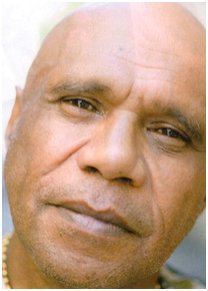 Once in a lifetime, an artist with an extraordinary spirit comes along. One such artist is Archie Roach: poet, storyteller and singer/songwriter of international renown, his songs and performances are poignant, passionate and totally compelling.
Archie Roach was born in 1956 in Mooroopna, north Victoria, lived at Framlingham in south western Victoria and was taken from his family at an early age. He moved from foster home to foster home, before settling with a family who had emigrated from Scotland to Melbourne. His love of music blossomed in their home, with their daughter teaching him the basic rudiments of piano. In his teens, a letter from a sister he didn’t know he had sparked an angry search for his real identity. Leaving home, he spent over a decade as an alcoholic living on the streets. During this period, Archie met Ruby Hunter, a Ngarrindjeri woman from South Australia, who had also been forcibly removed from her family. The pair fell in love and started their own family. It is Ruby that Archie credits for the couple’s decision to give up drinking and make a life for themselves. They went on to raise a family which included two children of their own and three foster children, plus a revolving door of children in need of shelter and refuge.
Although he had been performing within his own community for many years, it was in 1988 that he caught the attention of Paul Kelly and (the late) Steve Connolly, guitarist with The Messengers. Archie open for a Paul Kelly And The Messengers show at the Melbourne Concert Hall, and Kelly and Connolly went on to produce "Charcoal Lane”.
“Charcoal Lane”, his 1990 debut album was a landmark release that highlighted many of the social issues that were at the forefront of Aboriginal life in Australia. It featured the moving tracks "Took The Children Away" and "Down City Streets", which was co-written by his partner Ruby Hunter. The album cemented Archie Roach’s place in the musical community of Australia, with a veritable who’s who of musicians joining him in the studio, with guest appearances from Neil and Tim Finn (Crowded House, Split Enz), Vika and Linda Bull and members of The Messengers. "Charcoal Lane" went on to win ARIA (Australian Record Industry Association) Awards in 1991 for Best Indigenous Album and Best New Talent.
In the four years between the release of “Jamu Dreaming” and his third album “Looking For Butter Boy”, Archie continued to work – in his own community, the musical community and the broader Australian community. He appeared with Yothu Yindi at the 1994 AFL Grand Final, performed at WOMADelaide twice (making him the only artist to appear at three festivals – 1992, 1994, 1995) and embarked on a major international tour that took in America and Europe. Local tours included an opening spot on Suzanne Vega’s 1994 tour, Tracy Chapman’s 1996 tour, as well as opening for Patti Smith the following year. Archie also recorded a track “Our Home, Our Land” for the ATSIC Native Title album, and produced the debut release of Tasmanian Aboriginal band Rygela.
By early 2000, Archie Roach had already begun working on songs for his next album, but a number of other projects commanded his attention for most of the year.
Later that year, Archie undertook a new musical endeavour – working with the internationally acclaimed Bangarra Dance Theatre speakers on the production “Skin”. “Skin” premiered as part of the Olympic Cultural Festival and incorporated Archie and his music live onstage throughout the dance piece. “Skin” went on to an encore season at the 2002 Adelaide International Festival Of The Arts.
2001 saw Archie Roach continue to work across many fields. Along with Ruby Hunter, he was the figurehead of the national “Walking Into Doors Tour” and campaign, a pilot project of the Prime Ministers’ Department which dealt with family violence in the Aboriginal community. In October, three weeks after the horrific events of September 11th, Archie and Ruby flew to New York to perform at the prestigious Brooklyn Academy Of Music Festival.
In August, he was back in the studio with Paul Kelly and Richard Pleasance, working on tracks for what would become his fourth album. Two further sessions, one in late 2001 and one in early 2002 with Richard Pleasance saw the album completed by February 2002. Entitled “Sensual Being”. Released in July 2002, the album is a mature and sophisticated record, and probably the most uplifting collection of songs from Archie Roach’s career. Also recently released is the soundtrack to Rolf de Heer’s acclaimed new film “The Tracker”, which opened nationally in August. Archie provides vocals for an astonishing soundtrack (composed by Graham Tardif, lyrics by Rolf De Heer) and was part of a live performance premiere for the film at the Adelaide Festival earlier this year and the Melbourne International Film Festival 2002. The film has been chosen for Official Selection in the 2002 Venice Film Festival.
Subscribe
© 2022 Platinum Speakers