Print
Retired AFL Footballer, Ben Dixon is one of Hawthorns top ten goal kickers of all times.  Now in commentary, Ben Dixon is a favourite on Fox Footy! 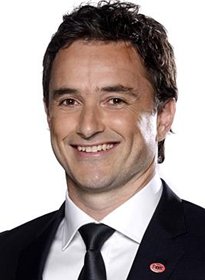 Ben Dixon has quickly become a favourite of Fox Footy viewers with his relaxed yet insightful work as a boundary rider on the network’s coverage of both AFL and the Foxtel Cup. In 2014, Dixon also takes on the role of an Assistant and Fitness Coach on the game’s first next foray into reality TV, The Recruit, which will be screened in prime time on Fox8.


One of Hawthorn’s top ten goal kickers of all-time at the time of his retirement, Ben Dixon is now more commonly recognised for his roles within the media and impressive mentoring and coaching resume. In 11 seasons with Hawthorn, Dixon’s skills as a forward made him a very valuable player.

Since retiring from AFL Football, Dixon remains actively involved in AFL ranks having fulfilled a role with the Hawks working as a Development Coach and hosting the club’s own TV show, Hawks Kids, which airs on Southern Cross TV in Tasmania and on the club’s website.

Dixon’s on screen charisma picked up through Hawks Kids landed him spots as a panellist on TAC Cup Future Stars for the Nine Network, a Boundary Rider for AFL Live radio, and as a host of AFL Central on BigPond Sports Weekend.In 2010, Dixon co-founded the now nationwide school holiday youth training camp ‘DraftStar’ with ex-teammate Robert Campbell. Dixon is head coach of the program that provides kids with skills for AFL success.

Recruited from Yarrawonga in 1997, Dixon announced his arrival with three goals in his third AFL game. A further 36 goals in 1998 saw the classy forward establish his place in the Hawks side. Dixon was a factor in Hawthorn’s 2000 and 2001 finals campaign, kicking 80 goals across the two seasons, a highlight being his after-the-siren goal to defeat Carlton before over 50,000 at the MCG in 2001.

Having passed the coveted 200 game milestone, Dixon was among the September action in his final year with the Hawks – a season that no doubt set the club up for its 2008 Premiership run.