Beverley O’Connor brings over twenty years experience working in the media across both radio and television as a presenter and journalist for the ABC where she has recently been a presenter on Australia Network, ABC News Breakfast and News 24. 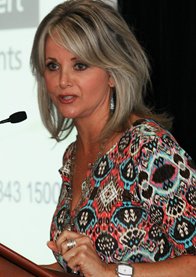 By far the best MC experience I've ever had. Beverley was unbelievably good to deal with. Very patient during technical hitches that made sound check drag on. Very professional, and really bought a lot of her own personality to the gig. Took the time to move around the room during meal breaks an talk to guests, and then integrate their stories into her presentation. After the formalities were over she stayed around for ages, even hitting the dance floor with guests. She was a huge hit!
Jump Media & Marketing

Would use Beverley again as (she) understood and delivered brief perfectly.
The Event Management Group

Beverley was a great MC for our event. She was extremely approachable, worked extremely well with the committee, was well prepared and briefed and engaging.
Darebin City Council
Beverley O’Connor travels from VIC
Fee Range: Up to $5000

Beverley O’Connor brings over twenty years experience working in the media across both radio and television as a presenter and journalist for the ABC where she has recently been a presenter on Australia Network, ABC News Breakfast and News 24.

She specialised in economics and politics and was a presenter on 774 ABC Radio in Melbourne for 5 years. Her move to television included hosting Stateline, now 720 Victoria, State Election coverage, news and sport as host of ABC Weekend Sport.

She was an inaugural Asia Pacific Journalism Fellow and travelled and reported from China in 2013. Other radio and television work included a stint at Channel Seven and on commercial ration as breakfast presenter for Vega 915 from 2005 – 2007.

Over the years Beverley has combined her passion for sport with presenting when she assumed the anchor position for the Seven Network after presenting Saturday Afternoon Sport for several years on the ABC.

Beverley was the first female director of the Melbourne Football Club, where she served for nine years, seven of those as Vice-President, the only woman to hold this role with an AFL club.

Beverley is a Life Governor of the Drug and Alcohol Foundation, having served six years on the Board and is an Australia Day ambassador, campaigner for breast cancer awareness, and ambassador for children's charities Variety and Ozchild.

Beverley’s experience and professionalism sees her share an insightful, entertaining and engaging perspective to all manner of corporate and community functions.