Print
Unafraid of controversy and determined to speak the truth, Bill Harrigan is just as much a character off the field as he was on.Whilst most people have an opinion on Bill Harrigan, arguably Australia’s finest sporting official,... 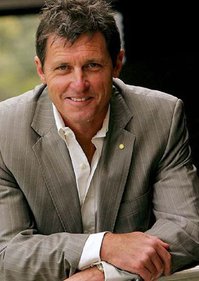 What can we say about Bill Harrigan? There is only one. A unique and thoroughly enjoyable experience is to be had when you come face to face with the most talked about referee of our time. As he was when he officiated on the paddock, Bill Harrigian is thoroughly professional and an eloquent speaker on the challenges, incidents and joys of his careers and life in general.

I could not think of anyone better than Bill Harrigan, given his profile at the time and given his exceptional work ethic and focus on keeping fit. It became apparent and obvious to me that Bill was also wonderfully gifted at public speaking and had the ability to draw a crowd in and keep their interest for long periods of time. Bill's address was first class and best-practice: he did not refer to any notes and engaged everyone in attendance including those that knew about Rugby League and those that did not. I would have no hesitation whatsoever in recommending Bill Harrigan to anyone or any company who required a Key Note speaker or someone to address a group in any capacity. His delivery and execution are first class.

Bill Harrigan was an excellent speaker. He was very well received by our audience and his stories were enjoyed by everyone, not just the rugby league fans in the room.

Whilst most people have an opinion on Bill Harrigan, arguably Australia’s finest sporting official, very few people really know him. Although now retired Bill has been acknowledged as Rugby League’s best ever referee, he has a profile equal to the major players. It was once quoted in a magazine ‘Rugby League Week’  the four most prominent names in rugby league at the time were Brad Fittler, Andrew Johns, Gordon Tallis and Bill Harrigan.

Having refereed a record number of Grand Finals, State of Origin, Test matches and first grade games he has been part of the most spectacular matches in rugby league history.  Bill has seen the games best players up close -often in his face. But there is more to Bill Harrigan than the game.

Love him or hate him he was the best Rugby League Referee in the World and if you don’t believe that just ask him, he’ll tell you.

Hailing from the Western Suburbs Bill’s positive attitude and motivation qualities have steered him to the top. As a young kid, Bill’s ambition was to pursue a career as a professional, important, respected man with letters after his name so Bill became a member of the Police Special Weapons and Operations Unit (SWOS) then a top International referee, thus realising his ambitions as a professional, important, respected man and according to some fans “letters after his name”.

But love him or hate him he has refereed 393 games and 17 years as a first grade referee, even the most hardened rugby league fanatic would have to give whistle blower Bill Harrigan his due recognition.

Being in the Police Force Harrigan was offered the more challenging role with the Tactical Response Group. He then worked for the Special Weapons and Operations Section and finally as a police negotiator. It was here he learned important lessons in arbitration and conflict resolution, attributes that have proved to be vital skills in life and on the rugby league field.

With the background and training with the TRG, Bill is still dedicated to a very strict training routine. Regular runs through the National Park at Sutherland and grueling beach side and gym workouts still has Bill just as fit as he was when refereeing. Who could forget watching Harrigan arrive at the in-goal area with run away try scorers, whistle in mouth waiting for the ball to be put down.

Becoming a referee all came by default when his Fairvale High School football coach volunteered him for the N.S.W. Rugby League Referees course, as no one from the school wanted to volunteer. After gaining his official referees ticket he got his chance to mediate in a local pub competition. He earned attention of refereeing officials and was asked to join the Parramatta District Referees Association and his career blossomed from here. He was officially graded in 1983 and on the 19th May 1986 he made his first grade debut. Bill retired after the 2003 Grand Final completing a legendary record breaking career. 393 first grade games, 10 grand finals in 1989, 90, 91, 97, 98, 99, 2000, 01, 02, 03. 21 State of Origins, 2 Super League Tri Series NSW v QLD. He refereed 22 Test matches including the blockbuster deciding test in 1994 between Great Britian and Australia. His international credits include going to England and refereeing the English Super League in 1996 finishing with the European Cup Final and the 2005, 06, 07, 08 & 09 Papua New Guinea NRL grand finals.

Bill is a family man of more complexity and sensitivity than the figure often presented in the media. He is a two time winner of the prestigious ‘Official of the Year” at the Australian Sports Awards and a best selling author with his autobiography ‘HARRIGAN’, here is your chance to get to know the real Bill Harrigan. Allow Bill to captivate you with his on field stories and motivate with his determination and commitment to be the best.

Unafraid of controversy and determined to speak the truth, he is just as much a character off the field as he was on.

Today Bill is one of the most prominent and successful speakers on the speaking circuit. Bill Harrigan will keep you totally entertained with his amazing and spellbinding police and refereeing stories from all over the world, or use him for his highly motivational and leadership qualities. But one thing for sure he will guarantee you a damn good laugh with his larrikan wit.

So Love Him or Hate Him.  BILL HARRIGAN will entertain you. Ask him, he’ll tell you.