Print
Sporting legend and business entrepreneur Billy Moore is best known as a Rugby League Legend, playing 211 NRL games for North Sydney and 17 appearances for QLD in State of Origin. His name is synonymous with the passionate “Queenslander, Queenslander” call. 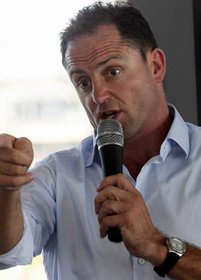 Your ability to comfortably relay stories about your life, messages you were able to impart and the mix of humour and sincerity in your delivery was fantastic. You are a true professional and a very engaging presenter. Definitely one of the best we have seen.

Billy was very well received. His speech was spot on – inspirational with a great message. Also, he took the 2017 school captains aside and had a very special and motivating talk with them. What a wonderful thing for him to do.

Billy was received very well. Before his talk he mingled with the guests and then during his talk he had everyone laughing and hanging onto every word. Would definitely recommend.

Department of Agriculture and Fisheries

Sensational! Got there on time, stayed around as long as we needed, engaged with the crowd and was right on point about the role of women in sport. Really resonated with us given we're a brand for women. An absolute champion

Billy Moore travels from QLD
Fee Range: Up to $5000

Sporting legend and business entrepreneur Billy Moore is best known as a Rugby League Legend, playing 211 NRL games for North Sydney and 17 appearances for QLD in State of Origin. His name is synonymous with the passionate “Queenslander, Queenslander” call.

A former Queenslander Billy Moore became a part of State of Origin folklore in 1995 when he was caught on camera yelling 'Queenslander! Queenslander!' to motivate an underdog Maroons team on their way out of the tunnel in Game 1 of 1995 at the Sydney Football Stadium. This catchphrase has since become a ‘Call to Arms!' for all proud Queenslanders.

Previously Billy had played in 211games over 10 seasons for the North Sydney Bears reserve grade premiership side before becoming a regular selection for the Maroons from 1992-1997.

During his career, Billy Moore played a total of three caps for Australia, including being a part of the 1995 Rugby League World Cup winning side in England, 17 caps for Queensland in State of Origin and 211 games for North Sydney Bears in National Rugby League.

In 2000 Billy was awarded the Australian Sports Medal for his contribution to Australia's international standing in rugby league. In 2006 he was named in the North Sydney Bears' Team of the Century.

After retiring from the game in 1999 at the age of 28, Billy made an extremely successful move into the hospitality industry. Billy is a small business entrepreneur and he's actively owned or run restaurants and hotels since 2001

A larger than life personality, Billy Moore is a popular speaker in both the sporting and business worlds. Billy says that tackling every day challenges has made him who he is and audiences respond extremely well to the stories of his life and the lessons he has learnt.

His post Rugby League career has seen Billy develop into a highly polished motivational speaker, special guest at Corporate functions and brand ambassador for some of Australia’s leading companies.

Billy is also found commentating on ABC Radio and Fox Sports and he co-owns a Augello's restaurant on Queensland's Sunshine Coast in Mooloolaba which has been awarded 2 World and 5 Australian Gourmet Best Pizza awards in its 23 year history.

The lighter side of the game

How to inspire and motivate