Print
Bob Downe, one of Australia’s most loved and enduring comedy characters, is the creation of broadcaster and entertainer MARK TREVORROW. Mark started his working life at 17 as a copyboy with The Sun News-Pictorial, before co-founding cabaret... 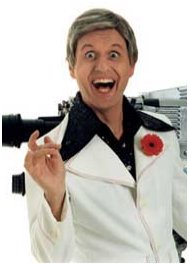 Bob Downe, one of Australia’s most loved and enduring comedy characters, is the creation of broadcaster and entertainer MARK TREVORROW.
Mark started his working life at 17 as a copyboy with The Sun News-Pictorial, before co-founding cabaret comedy group The Globos, who released two Australian Top 20 hit singles, Tintarella di Luna (1982) and The Beat Goes On (1983). In 1984 he formed a comedy duo in with Cathy Armstrong, in which Bob Downe was born.
The first Bob Downe album, Greatest Hits, was released in Australia in 1996, with 1997's Jazzy! nominated for a Best Comedy Album ARIA music award. 1998 saw the Australian publication of his first book, All Bob Downe! (Penguin) and he hosted the Sydney Gay & Lesbian Mardi Gras Parade broadcast for Network Ten. In 1999 and 2000, Bob again hosted the Mardi Gras Parade, a consistent ratings winner for Network Ten.
Bob Downe's comedy/chat series, The Bob Downe Show (Foxtel/TV1), went to air in December 2000. Bob Downe's last three national Theatre speakers tours, Million Sellers (1999), Whiter! Brighter! (2000) and Cold August Night (2002) have been sellouts everywhere, including the Sydney Opera House and the State Theatre speakers.
Mark was awarded Cabaret Artiste of the Year at the 1999 Green Room Awards in Melbourne, receiving the honour again in 2000. In 2001 Bob released his third album, Huge Hits, and played a successful three-night showcase at New York's Westbeth Theatre speakers.
Meanwhile, following the success of his 2002 ABC documentary The Way We Were: Sinatra in Australia, a 10-part series of The Way We Were is currently airing to great acclaim and top ratings for the national broadcaster. He has also appeared in the outrageous animated Australian/Canadian sitcom, Quads, as the voice of Spalding (SBS 2002), and made cameo appearances in the first two series of Kath & Kim.
In 2006 Bob Downe performed in Melbourne, Las Vegas, Mauritius, and most recently at the Edinburgh Festival.
Subscribe
© 2022 Platinum Speakers