Print
Born and raised on Victoria’s Mornington Peninsula, Brodie Harper is a presenter for the Nine Network’s top rating travel and lifestyle program in Victoria ‘Postcards’. She is also a well-established weather reporter for Channel Nine’s nightly... 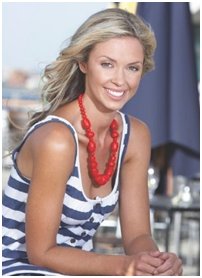 Brodie Harper travels from VIC
Fee Range: Up to $5000

Born and raised on Victoria’s Mornington Peninsula, Brodie Harper is a presenter for the Nine Network’s top rating travel and lifestyle program in Victoria ‘Postcards’. She is also a well-established weather reporter for Channel Nine’s nightly news bulletin, regularly filling in for Livinia Nixon. Brodie Harper is a regular and popular celebrity giving comment on Nine’s top rating show ‘20 to 1’. As well as being a prominent reporter for Nine’s national coverage of World Wide Sports. Brodie has covered the glitz and glamour of the Melbourne Spring Racing carnival, the Footy Show red carpet night and more.


As a leading TV personality and media favourite, it’s not surprising Brodie has recently enjoyed her role as the ‘face of’ this year’s Mornington Cup and last year as the ‘Caulfield Classic Style Ambassador’ for the Caulfield Spring Racing Carnival. Brodie was host to many of the Caulfield Spring Racing Carnival’s events, roving reporter, style, fashion and the media ambassador for the event. Finding the perfect Spring Racing frock is never a problem for Brodie as she is a favourite amongst designers both international and locally. Brodie currently enjoys being an ambassador for The Hilton in Melbourne.
Brodie first began her television career as a presenter on Channel Nine’s ‘Home-grown’ series in 2007, now as an integral member of the Postcards team, she has travelled to every corner of Victoria from Walhalla to the Great Ocean Road and beyond. Always keen for a challenge, Brodie sites an adrenaline pumping tear around Phillip Island race track as a highlight, most recently driving in the Lexus’ Celebrity Challenge Race at this year’s Melbourne Grand Prix.
While lucky to see so much of Victoria when filming Postcards, she is also a keen overseas traveller, having travelled to remote Thailand where she visited her World Vision sponsor child. The moving experience enabled her to meet her sponsored child and the child’s family, see where they live, are schooled, and how the community thrives and maintains development through international aid.
Like most Australians, Brodie’s family has also been touched by cancer and she is a passionate supporter of Breast Cancer Australia. In 2008, Brodie’s charitable side was first witnessed by the nation when she donned a silver spandex suit for Nine’s ‘Hole in the Wall’ program which resulted in a peak audience of 1.7 million viewers watching her contort her body and be slammed by the wall all in the name of charity. She donates her time to assist in many causes and their events and promotional campaigns such as TLC for Kids ‘Tracky Day’, The Salvation Army appeal, the Starlight Foundation and Challenge - supporting kids with cancer.
Subscribe
© 2022 Platinum Speakers