Media and Racing lndustry Personality- Melbourne Cup Race caller Horse Racing has been Bryan's life for over 50 years!  Loved by both television and radio listeners alike, Martin is best known for calling his own horse the legendary Fields Of Omagh to win 2 Cox Plates. He has been calling for in excess of 45 years and in 2017 called his 29th Melbourne Cup for Radio SEN in Melbourne. 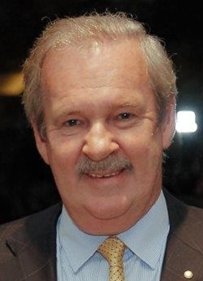 Bryan Martin OAM travels from VIC
Fee Range: Up to $5000

Loved by both television and radio listeners alike, Martin is best known for calling his own horse the legendary Fields Of Omagh to win 2 Cox Plates. He has been calling for in excess of 45 years and in 2017 called his 29th Melbourne Cup for Radio SEN in Melbourne.

Bryan recalled hearing the crystal clear call of the Melbourne Cup in L955 won by Evening Peal, Bryan was 6 years old and his father had put Bryan and his 3 other children in the sweep, Bryan drew Evening Peal and so his love of racing began.

Beginning an unofficial career by calling plastic horses on string on the family kitchen table back in the early sixties, Martin quickly developed a love for the sport of racing and a passion for broadcasting-" I started my career as the mail boy at 3AW in 1966, anything to be involved in radio!" From there he moved to 5DN in Adelaide for 2 years then answered a call to join the greater 3UZ in Melbourne in 1972, a move to 3DB in 1984 then to Sport 927 taking over the position as number 1 caller from Bill Collins in 1988.

A television career move to TVN in 2005 until his early retirement in 2007. Radio SEN wooed Martin from retirement in 2010 and he came back to cover the Spring and Autumn Racing. After calling his 29th Melbourne Cup Martin has now retired from race calling. He completed a series of the History Of The Melbourne Cup on Radio RSN this Spring.

The Herald Sun poll in 2005 had Martin number 1 race caller in Australia, gaining 38% of the vote.

Taking Australian Racing to an international level, Martin has called in 9 countries around the world including Dubai, Hong Kong, New Guinea, USA, Canada and New Zealand along with every state of Australia. He won many awards in the field of sports broadcasting with his dramatic call of Better Loosen Up winning the 1990 Japan Cup before 187,000 people in Tokyo. Martin's call was the only English call to go around the world.

His thrill of calling horses he loved was taken to a new level, when in 2003 he called his own horse Fields Of Omagh to win the 3 million dollar W. S. Cox Plate for Television, radio and the on-course broadcast. His dream would be repeated again in 2005 when Fields Of Omagh again won the great race and then retired. While the champagne flowed so did the accolades for a most professional race call against the odds.

Martin chaired the Australian Racing Hall Of fame for 10 years from 2001 until 2011. He was a founder of Living Legends the retirement home for champion horses at Woodlands in Geenvale.

Along wife Jill, together they have toured the world taking racing fans to the great race meetings. ln June of 2019 Martin took his 8th Royal Ascot tour and the lrish Derby.

Currently in his 8th year as an Ambassador for the Lexus Melbourne Cup. Touring Australia and New Zealand with the prized trophy, retelling the amazing stories around the iconic race.