Print
Buzz Aldrin was born in Montclair, New Jersey on January 20, 1930. His mother, Marion Moon, was the daughter of an Army Chaplain. His father, Edwin Eugene Aldrin, was an aviation pioneer, a student of rocket developer Robert Goddard, and an aide to... 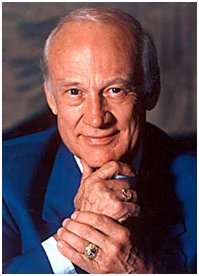 Buzz Aldrin was born in Montclair, New Jersey on January 20, 1930. His mother, Marion Moon, was the daughter of an Army Chaplain. His father, Edwin Eugene Aldrin, was an aviation pioneer, a student of rocket developer Robert Goddard, and an aide to the immortal General Billy Mitchell. Buzz was educated at West Point, graduating with honors in 1951, third in his class. After receiving his wings, he flew Sabre Jets in 66 combat missions in the Korean Conflict, shooting down two MIG-15's. Returning to his education, he earned a Doctorate in Astronautics from the Massachusetts Institute of Technology in Manned Space Rendezvous. The techniques he devised were used on all NASA missions, including the first space docking with the Russian Cosmonauts.
In October 1963, Buzz Aldrin was selected by NASA as one of the early astronauts. In November 1966, he established a new record for Extra-Vehicular Activity in space on the Gemini XII orbital flight mission. Buzz has logged 4500 hours of flying time, 290 of which were in space, including 8 hours of EVA. As Backup Command Module Pilot for Apollo VIII, man's first flight around the moon, he significantly improved operational techniques for astronautical navigation star display. Then, on July 20, 1969, Buzz and Neil Armstrong made their historic Apollo XI moon walk, thus becoming the first two humans to set foot on another world. This unprecedented heroic endeavor was witnessed by the largest worldwide television audience in history.
Upon returning from the moon, Buzz Aldrin embarked on an international goodwill tour. He was presented the Presidential Medal of Freedom, the highest honor amongst over 50 other distinguished awards and medals from the United States and numerous other countries.
Since retiring from NASA, the Air Force, and his position as Commander of the Test Pilot School at Edwards Air Force Base, Dr. Aldrin has remained at the forefront of efforts to ensure a continued leading role for America in manned space exploration. To advance his lifelong commitment to venturing outward in space, he has created a master plan of evolving missions for sustained exploration utilizing his concept, "The Cycler", a spacecraft system which makes perpetual orbits between Earth and Mars. In 1993 Dr. Aldrin received a U.S. patent for a permanent space station he designed. More recently he founded his rocket design company, Starcraft Boosters, Inc., and the ShareSpace Foundation, a nonprofit devoted to opening the doors to space tourism for all people.
Dr. Aldrin has continued to share his vision for the future of space travel as a speaker and by authoring two space novels that dramatically portray man's discovery of the ultimate frontier: The Return (Forge Books, 2000) and Encounter with Tiber (Warner Books, 1996). He has also authored an autobiography, Return to Earth and a historical documentary, Men from Earth, describing his trip to the moon and his unique perspective on America's space program.
On Valentine's Day 1988, Buzz married Lois Driggs Cannon of Phoenix, Arizona. She is a Stanford graduate, an active community leader in Southern California, and personal manager of all of Buzz's endeavors. Their combined family is comprised of six grown children and one grandson. Their leisure time is spent exploring the deep sea world of scuba diving and skiing the mountain tops of Sun Valley, Idaho.
Now Buzz, as Starcraft Enterprises - the name of his private space endeavors - is lecturing and traveling throughout the world to pursue and discuss his and others' latest concepts and ideas for exploring the universe. He is a leading voice in charting the course of future space efforts from Planet Earth.
Subscribe
© 2022 Platinum Speakers