Print
Cal Wilson is one of the most well rounded media talents in the country and consequently is in high demand. Her comedy career started back in New Zealand in 1990 and due to her sharp wit her popularity just continues to grow. 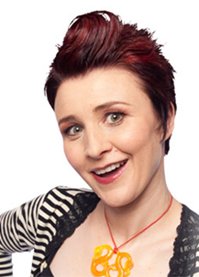 Highly professional, dealt with last minute changes to the running order in a relaxed and courteous manner. No request was ever too difficult. Cal Wilson did not miss a beat - including attention to detail regarding pronunciation of items in script. She kept the audience laughing and entertained throughout the whole evening.

The most positive comments from management that I have ever received. Cal went out of her way to learn about the organisation and to include this knowledge in her comedy.

On behalf of everyone at Banksia that Cal Wilson was an absolute delight to work with. We had to change the order of proceedings for the evening at the very last moment, but nothing was too hard for Cal. She is a consummate professional, who had the audience in stitches throughout the evening. Our client at Banksia has received much positive feedback on Cal since Friday. She lifted spirits in the room with her quirky humour and was perfect in her role as MC. We would highly recommend Cal and Saxton for any future business - and I also want to thank you for your thoroughness and efficient service. It's been great to work with such a professional team!

Cal Wilson is one of the most well rounded media talents in the country and consequently is in high demand. Her comedy career started back in New Zealand in 1990, where she was a founding member of the Court Jesters improv group, and was part of the NZ team that won the World Theatresports title in Los Angeles in 1994.

In 1997, she received the inaugural Billy T Award, New Zealand's most prestigious comedy award recognising comedians with outstanding potential, and was judged Best Comedian 2000 by Metro Magazine. However, like all great New Zealand talent, Australia has claimed her as its own and Cal has made Melbourne her home for the past eight years.

Her live performances demonstrate her enormous talent as a stand-up comedian. Her festival shows play to sold out houses, with 'I'm All Ears' (2012), 'The Great Intender' (2011), 'Lively' (2010) and 'Up There, Cal Wilson' (2006) garnering rave reviews. Cal has appeared twice at Montreal's Just for Laughs Festival, and had a successful season of her one woman show 'Jekyll and Bride' at the Edinburgh Fringe Festival. In 2001 Cal won the Best Newcomer Award at the Melbourne International Comedy Festival, and has performed right around the country as part of the MICF Roadshow.

A much loved regular guest on television shows such as Spicks and Specks, Good News Week and Thank God You're Here, Cal was also the host of ABC's Sleuth 101 in 2010. In 2011, Cal has ricocheted back and forth between Australia and New Zealand as a regular panelist on NZ's TV 3 topical comedy show 7 Days as well as appearing on Channel 10's Good News World and QI Live, the live stage tour with Stephen Fry and Alan Davies.

If television and live performance wasn't enough, Cal is also an experienced radio host, co-hosting Nova's national drive show The Wrong Way Home, with Akmal in 2007 and 2008. In 2009 she joined Dylan Lewis co-hosting mornings on Nova 100. 2010 saw her filling in for Dave O'Neil for three months on Vega Breakfast with Ian 'Dicko’'Dickson.

Cal is also a sought after MC for corporate events in New Zealand and Australia.  Cal is also a wonderful corporate performer and very popular in this market. She has the experience and ‘know how’ to deal with the situations that can arise together with the profile and appeal to gratify a wide spectrum of audience. Cal’s stand up career has been well rewarded and recognized over the years.