Print
In 1979 Deborah was the at the centre of the first contested equal opportunity anti-discrimination case in Australia. This was a lightning rod for the women’s movement at the time. The case was fought for more than a year and after winning the battle against Sir Reginal Ansett in the High Court, she joined Ansett Airlines to become the first female airline pilot for a major airline in Australia. 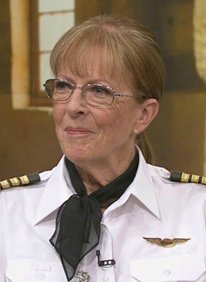 Testimonials for Captain Deborah Lawrie AM

I came with an interest in aviation safety and I left feeling passionate about it.

I just wanted to say thank you for the extremely interesting presentation. Your stories from personal experiences were amazing.

Fascinating insight into the accident at Tenerife and what we could learn from it.

Your story is such an inspiration for women of all ages. Thank you for not giving up.

Captain Deborah Lawrie AM travels from QLD
Fee Range: Up to $5000

In 1979 Deborah was the subject of the first contested equal opportunity anti-discrimination case in Australia. After fighting for more than a year she won the legal battle against Sir Reginald Ansett in the High Court. She joined Ansett Airlines to become the first female airline pilot for a major airline in Australia.

After the Pilot’s Dispute in 1989, Deborah relocated to The Netherlands to fly with KLM Cityhopper. She held the position of Flight Safety Manager for 4 years and was the Chief Flight Safety Investigator for 8 years. Deborah was chairman of a European Safety Working Group for 5 years and was a member of the IATA Aircraft Accident Working Group. In 2004 Deborah was part of a team commissioned by The Netherlands, to align the Latvian aviation standards with those of the European Union.

In 2008 Deborah returned to Australia to join Jetstar Airways and was a Captain on the Airbus A320 based in Christchurch. In July of 2012 Deborah joined Tigerair in Sydney and was a Check and Training Captain up until the airline was shut down in April 2020.

Deborah learnt to fly at Moorabbin airport when she was 16 years old and has over 50 years of experience in aviation. She was inducted into the Victorian Honour Roll of Women in 2001 and was appointed as a Member (AM) in the General Division of The Order of Australia in June 2019 for significant service to aviation as a commercial pilot, and to women in the profession. Deborah was inducted into the Australian Aviation Hall of Fame in 2020.

Air Crashes that have changed Aviation

Aviation Safety Lessons for other Industries

Human Factors....Changing Behaviour in other Industries

Investigation into Breakdown of an Organisational Structure

Forty years of change in the Aviation Industry

An Investigators insight into MH370

Insights into the future of Aviation

Why Pilot’s will always be needed - automation limits you should know - or maybe not!

Learning to Fly….past and present