Print
Caroline has been the chief football writer for The Age since 1999 and now appears on 3AW's pre-match AFL discussion, as a panelist on Channel Nine's “Footy Classified”, and an occasional panelist on the ABC program “The Offsiders. 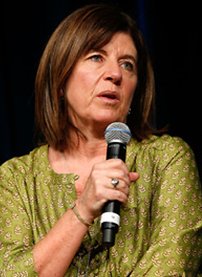 Caroline Wilson travels from VIC
Fee Range: Up to $5000

Caroline Wilson has been covering Australian sports, predominantly AFL, since 1982. Born and raised in Melbourne, Wilson is the daughter of Ian Wilson, who was president of Richmond Football Club between 1974 and 1985.

Caroline has since won numerous sporting journalism awards including being voted by the AFL Players Association as Football Writer of the Year in 1999 and Most Outstanding Feature Writer by the AFL Media Association in both 2000 and 2003. She also won the 2003 Melbourne Press Club Quill Award and has been highly commended a further four times.

Caroline appeared every Wednesday night on White Line Fever on Fox Footy until the show was cancelled in 2006 following the dissolution of the Fox Footy Channel. She has also worked in the UK and Europe where she covered four Wimbledons and three British Opens, the FA Cup final and the British soccer riots for the Melbourne Herald Sun.

In 2010, Caroline was presented with an Australian Sports Commission lifetime achievement award for her contribution to sports journalism. In 2013, Wilson won her first Walkley Awards, sharing the 2013 All Media Coverage of a Major News Event or Issue award and winning outright, the 2013 All Media Commentary, Analysis, Opinion and Critique award.

Caroline has been the chief football writer for The Age since 1999 and now appears on 3AW's pre-match AFL discussion, as a panelist on Channel Nine's “Footy Classified”, and an occasional panelist on the ABC program “The Offsiders” having recently ended a three year stint as panelist for Network Seven’s “Talking Footy” program. She is married to Seven News reporter, Brendan Donohoe

Caroline’s experience sees her highly sought after as a master of ceremonies, panel host or moderator and excellent guest or keynote speaker where she shares her successful career and challenging journey in a male dominated arena.