Cathy Freeman OAM holds Legend Status in The Sport Australia Hall of Fame. A proud Kuku Yalanji woman, the many firsts she has achieved for Australia have made her a household name. 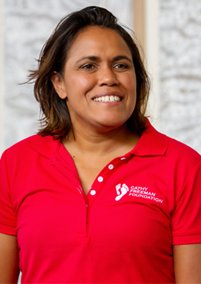 Catherine was absolutely wonderful all day. Every Casey staff member that came in contact with her was impressed by her relaxed and down to earth personality. More importantly feedback from the public has been outstanding. Many children have told us meeting Catherine at the GP Run was the best day of their lives. A lot of feedback we have received from the public was that this year was the best GP Run ever and I'm sure an enormous amount of that feedback came to us because of Catherine's performance on the day.

Catherine was fantastic, real and raw. Exactly what we wanted to see and perfect for our conference and tone.

Cathy was the perfect fit for our audience, lovely to work with and a privilege to engage with someone of such a genuine nature. Our audience were fully engaged and the whole series was a great success. Thank you.

Cathy Freeman was so engaging during her session and was an absolute pleasure to work with.

Cathy Freeman is a proud Kuku Yalanji woman. She is also an Australian Indigenous Olympic champion. She ran her first race when she was five and realised that she loved the way racing made her feel. She won her first gold medal at a School Athletics Championships when she was eight years old.

Cathy Freeman was a member of the gold medal-winning 4x100m relay team at the 1990 Auckland Commonwealth Games, and in so doing became the first female Australian Aboriginal to win a gold medal at an international athletics event. She was awarded Young Australian of the Year in 1991 and a year later in Barcelona became the first Australian Aboriginal to represent Australia at an Olympic Games. Two years later, Cathy won gold in both the 200m and 400m at the Commonwealth Games in Victoria, Canada. At the Atlanta Olympic Games in 1996, she won silver with a personal best time of 48.63s in the 400m. She was crowned World Champion in the same event at the World Athletic Championships the following year, was awarded Australian of the year in 1998, and was again World Champion in the 400m in 1999.

Cathy's most notable achievement, however, came in 2000 at the Olympic Games in Sydney. Her image was beamed into millions of homes around the world when she became the first competing athlete to be invited to light the Olympic flame at the opening ceremony. She then went on to win the gold medal in the 400m, realizing a life-long dream.

In 2016, Cathy was appointed a member of the IOC Sport and Active Society Commission.

1991 Awarded Young Australian of the Year.

1998 Awarded Australian of the Year.

2001 Awarded Laureus Sportwoman of the Year.

2001 Awarded Medal of the Order of Australia (OAM).

2001 Inducted into the Australian Institute of Sport Living Legends Hall of Fame.

2005 Inducted into The Sport Australia Hall of Fame.

2009 Inducted into the Queensland Sport Hall of Fame.

2011 Elevated to "Legend of Australian Sport" in The Sport Australia Hall of Fame.

2015 Recipient of the IOC Women and Sport Award (Oceania).

Focusing on the Finishing Line

Four Hundred Metres to a Dream