Print
Cherylee Harris is one of Adelaide’s most popular television personalities. Cherylee joined Channel 7 in 1993 as a presenter on AM Adelaide, and later became a regular co-host, filling in for hosts Steve Whitham and Jan Beasley. Then in 2002 she... 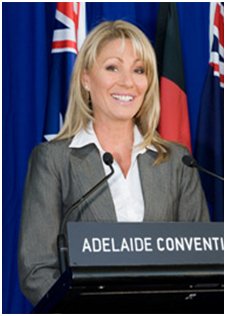 Cherylee Harris travels from SA
Fee Range: Up to $5000

Cherylee Harris is one of Adelaide’s most popular television personalities. Cherylee joined Channel 7 in 1993 as a presenter on AM Adelaide, and later became a regular co-host, filling in for hosts Steve Whitham and Jan Beasley. Then in 2002 she became the sole host of the one-hour live morning program, a position she held until 2003.
In 1994 Cherylee took on the role of weekend weather presenter at Channel 7, frequently stepping in for the weeknight weather reports on Seven News. Cherylee was also a presenter on Seven’s popular lifestyle series, Discover and Fishing & Boating South Australia (FAB).
In 1995 she was the Co-host of Summer SA, along with network TV personality John Deeks. In the following year she co-hosted the program with Chris Dittmar.
Cherylee Harris has been the anchor in many telecasts including the presentation of the Adelaide Cup Day (2 hours live), Oakbank (4 Hour live), HIA Housing Industry Awards, the Bay To Birdwood Rally and many more. In the year 2000 Cherylee was the recipient of a “TV Industry Clear Speech Award” presented by the Lord Mayor at the Adelaide Town Hall.
Prior to her career in television, Cherylee had a successful career in the modelling and fashion industry in Adelaide. Cherylee moved to Melbourne in 1980 and during a six-year period she worked in sales and marketing - and also owned and operated three successful beauty salons.
Upon returning to Adelaide in 1986, Cherylee Harris joined Dunn and Bradstreet International and held the position of State Sales and Marketing Manager for 6 years in addition to the role of National Training and Business Development Manager.
Her marketing experience is supported by qualifications in Sales, Marketing and Business Development. Cherylee has held positions with accounting firm PriceWaterhouseCoopers, Gerard Industries, ACHA Hospital Group and was a contract marketing consultant for Orthopaedics SA Group. She is currently in her final year of studying an M.B.A (Masters in Business Administration) at the University of Adelaide, and is Media and PR Advisor for Phil Hoffmann Travel.
Cherylee is currently freelance in the media industry, and works as a part time reporter for Channel 7’s Discover program, as well as being master of ceremonies for many major South Australian events.
Subscribe
© 2022 Platinum Speakers