Print
Ciaran Lyons is verifiably one of Australia’s fastest-rising stand-up comedy stars and media personalities. Having first performed stand-up at just fourteen years of age, at twenty-two Ciaran is already a seasoned professional. 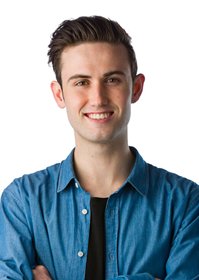 Laconic and yet professional, Lyons is a master at creating massive laughs with his disarming, conversational delivery

I was already itching to see another show minutes after leaving... his personal stories of being the youngest sibling, travelling to Las Vegas and perverted high school examiners were a hoot.

One of Australia’s fastest-rising stand-up comedy stars and media personalities, Ciaran Lyons began performing stand-up at just fourteen and was a roving reporter for The Project before he turned eighteen.

Now in his early twenties, Ciaran is already a seasoned professional. With multiple comedy award wins and nominations, TV and radio appearances and sell-out shows on the comedy festival circuit, Ciaran is a firm fixture in Australia’s comedy and media landscape. Ciaran confronted Australia’s homelessness crisis as one of the five participants spending ten days living on the streets for SBS TV’s acclaimed series Filthy Rich & Homeless. The highly anticipated, must-watch third season aired in June 2020 on SBS and is now available for viewing on SBS On Demand.

Driven by the time he spent with some of Sydney’s most vulnerable youth whilst seeking shelter, warmth and basic amenities at the Taldumande Youth Services Crisis Refuge, Ciaran was so affected by the work being done for homeless children and young people that he is now an Ambassador for the service and has pledged to do what he continue raising awareness for homelessness.

An in-demand podcast guest, Ciaran has appeared on Justin Hamilton’s The Shelf, Wil Anderson and Friends at Splendour in the Grass, and hosting the hugely popular The Dollop live show.

He regularly presents on national youth station triple j, where he has been heard solo hosting every show from the early morning shift to the Breakfast Show and Drive. The start of 2021 saw Ciaran host an immersive series for 7NEWS Australia (Channel Seven) “Life Done

Now based in Sydney, Lyons is a regular at all the major comedy venues and festivals across Australia and an in demand MC for events and corporate functions. These have included WA HyperFest Music Festival Mainstage, Peking Duk’s Melbourne Clothing Launch Event and hosting triple j’s RAW Comedy state finals in both NSW and WA.

Ciaran is a keynote speaker on the subject of ‘Homelessness’ and ‘Respect and Compassion’ based on his experience confronting homelessness on SBS series Filthy Rich and Homeless. Most recently he spoke at the CEO sleepout in Queensland to over 200 CEOs on his experience.

How one simple conversation can change a person's life

A small, kind gesture to someone can change their day

Empathy in the workplace

Say yes to every opportunity, you don't know where it will take you

Your calling in life comes from taking unexpected opportunities