Craig Smart is known for his warm yet authoritative presentation style and has become a familiar and well trusted figure in Australian Broadcasting. Described as ‘dynamic and charismatic’ Craig is a wonderful choice for any event. 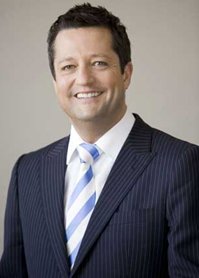 "Craig's speech set the scene perfectly and his story was anything but ordinary. Craig's presentation took us through his time in France, working on a cattle station, teaching in secondary schools, supporting autistic children, and working on radio and television. All of which wove into the theme of our conference. Just the keynote we were looking for."
Steve Watson, Principal of the Western Australian Institute for Deaf Education.

"Craig spoke at a 'Ride to Work' Breakfast in 2012 at QEII Medical Centre. The event was held to encourage staff to ride to work and thank them for participating in the various cycling initiatives on site. Knowing Craig had a passion for cycling and is dynamic and charismatic in front of an audience, the decision to ask him to speak at the event was an easy one. I was thrilled with his efforts, making a speech without notes to a room full of people. He adapted his style of delivery to the casual nature of the event, and connected to the audience with several personal anecdotes. We received very positive feedback from those who attended the breakfast about Craig's style of delivery and most of all his warm persona – something you can't manufacture. I wouldn't hesitate to ask Craig to host or speak at other public or stakeholder events I organise."
Claire Krol, WA Health Department.
Craig Smart travels from WA
Fee Range: Up to $5000

Craig Smart is known for his warm yet authoritative presentation style and has become a familiar and well trusted figure in Australian Broadcasting. Described as ‘dynamic and charismatic’ Craig is a wonderful choice for any event.

Craig Smart spent the best part of a decade as one of the voices – and faces – of ABC News in Western Australia, before being approached to present the nightly news service for Channel Ten in Perth.

Craig spent a year overseas as a teenager, learning to speak French while billeted with a local family. In his gap year back in Australia he got his hands dirty on farms from the Kimberley to the southern wheat belt in WA. He went on to qualify and work as a teacher, and later ran a care home for autistic people with his wife. But it was a period selling picture features to The West Australian that set him on his current course. He embarked on a Graduate Bachelor of Journalism, won the prize for Top Student and landed himself a job with WA Newspapers. It wasn’t long before he was asked to join the ABC as a reporter and radio news presenter in the state’s south.

He spent several years with the national broadcaster in Albany, and was finally lured back to Perth and began the transition into state wide news presentation. Since then, he has built the profile and reputation he has today. Craig’s interests range from news and current affairs, to education, language, travel, music, cycling…and more. He brings gravitas and substance to speaking events, but can also draw on a host of life experiences to add colour and humour.

Craig is also a first class master of ceremonies/facilitator who regularly hosts corporate and government events.

Ability and Disability
Observation from time spent caring for people with autism... sometimes heart-breaking, but often inspiring. A reality check for the times we're tempted to feel sorry for ourselves.
Subscribe
© 2022 Platinum Speakers