Damien Fleming’s presentations draw on his cricket career experiences from the great highs of playing in a hugely successful team who rose to be the dominant team in the world with great preparation, planning and teamwork, to his own self-coaching from battling to overcoming injuries to be the best player he could performing under the pressure’s of international cricket. 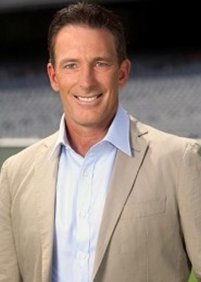 Not only did Damien treat our engagement as a professional outing, he made time to understand our audience, the context and key messages and he was well prepared and came across a slick and professional. He does an excellent job of enhancing his offering to the audience by way of his approachability, professionalism, preparedness & commitment of time – he is also very personable and engaging”.

'Just a short note to thank you so much for your great contribution to our Customer Golf Day @ Southern Golf Course. Aside from your very entertaining talk, we really appreciated the warm & friendly manner in which you carried yourself with our guests, they all loved listening to funny stories & were thrilled to have the opportunity to come up & have a chat after your talk'

Damien brought a fresh perspective to the topic, offering interesting and insightful comments on the world of cricket and business, drawing on his World Cup and Test experience and his coaching background. His warmth, humour and pacy presentation style kept our guests entertained and attentive.

Fantastic delivery last night! Many thanks for making the night such a resounding success.

Damien Fleming was a bright, bubbly and entertaining speaker at our NECA Excellence Industry Awards Function. He is easy to deal with, polite, punctual, funny and knows his 80s music as well as a cricket story or two. Perfect for a mix of business and sporting themes.

Damien Fleming is a refreshing and entertaining speaker, drawing on his years playing Test Cricket for Australia and working in a strong team environment. During his presentations, he weaves humorous anecdotes together with strong motivational messages which easily translate into business and personal situations.

Today, Damien is a well-known media commentator, hosting cricket programs on Fox Sports, SEN and commentary stints on ABC radio’s Cricket and Football Programs. He also writes a regular column for the Inside Edge magazine and is a current leadership & skills consultant for the Australian Cricket Academy.

The only Australia to take a hat-tick in a test debut in 1994-95 against Pakistan, Damien Fleming went on to play 20 Test Matches for Australia.

A right armer renowned for his steadiness and reliability at the bowling crease Damien was also a key member of Australia's one-day international team, playing 88 matches (including the 1999 World Cup victory) with 134 wickets at an average of 25.38. He will also be remembered for his composed bowling in the final overs of World Cup semi finals in 1996 and 1999 against the West Indies and Pakistan respectively. In 2003, injuries finally took their toll and he retired to take up a coaching role at the Adelaide cricket academy (now the Centre of Excellence in Brisbane).

Damien Fleming is known as the 'bowlologist' an expert on the subtleties of swing bowling and biomechanics. Damian also writes columns for the Sunday Age. Today, he is a popular figure on the public speaking circuit. He is regularly asked about the last over he bowled in the 1999 World Cup Semi Final Tie and the dropped catch by Shane Warne which denied him his second hat-trick.

Damien Fleming’s presentations draw on his cricket career experiences from the great highs of playing in a hugely successful team who rose to be the dominant team in the world with great preparation, planning and teamwork, to his own self-coaching from battling to overcoming injuries to be the best player he could performing under the pressure’s of international cricket.

He is also an entertaining after dinner speaker with his genuine and personable style making him a hit with both male and female audiences alike.

More recently Flem joined 3AW where he applies his cricket expertise and all-round sports presentation skills across a variety of programs. Throughout the cricket season ‘Flem’ continues to commentate on the T20 Big Bash for Network TEN in 2018 and makes regular appearances on Inside Cricket and the Back Page for Fox Sports.