Calling himself an Investigative Humourist, Dan Ilic has become one of Australia’s most recognised voices in media. Comedian, presenter and filmmaker, Dan is creative, down to earth and funny in delivery. 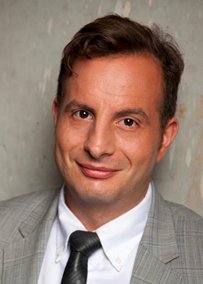 A true creative, Dan is a professional and passionate to work with.

A revelation to our audience... his brain and his humorous view of the world fitted in perfectly.

Dan has a great insight into the trends in the media and communications sectors and he understands how to present in a funny, entertaining and fast pace style that keeps audiences engaged and laughing.

He has been making television in Australia for ten years. His credits include: Australia’s Funniest Home Videos (Nine), The Olympic Show (NBC), The Ronnie Johns Half Hour (Ten), The Mansion (Comedy), Hungry Beast (ABC), Hamster Wheel (ABC), Can of Worms (Ten), The Feed (SBS2) as well as being a regular on comedy panel shows and news magazine programs.

In 2015 Dan took up the role of  Senior Satire producer AJ+ English, Al Jazeera’s digital platform for millennials. He returned to Australia later that year to develop digital video strategy for Fairfax Media’s largest news products.  Later that year Dan was named by Fairfax Media’s Green Guide as a “digital disruptor”  in their list of “Australian TV’s dealmakers and players.”.

Dan took his brand of evidence based shitstiring to the COP21 climate change talks in Paris, where he hosted and produced, Fossil Of The Day, a daily satirical take on the climate negotiations.

He is also a prolific radio broadcaster having started his radio career on Up For It, FBi Radio’s Breakfast program, Dan has gone on to host programs on Triple J, Radio National, and regularly fills in on Breakfast on the top rating 702 ABC Sydney. As a passionate supporter of community broadcasting, Dan served on the board of FBi Radio for two years.

Downwind Media, Dan’s branded entertainment company, has been responsible for some of the most talked about advertising campaigns in Australia. Some of the clients Dan has created work for include, Dick Smith Foods, Vic Roads, Get Up!, Apple,  GAME, Mitsubishi Electric, The Australian Olympic Committee, Honda, Destination Queenstown and The Commonwealth Bank.

As a video journalist for Fairfax, Dan covered the DNC in Denver, the Sundance Film Festival and broke the news to the world of Heath Ledger’s death in New York City.

In 2011 Dan wrote and directed Y2GAY which became a finalist at Tropfest, and since played at over 20 film festivals around the world.

As a comedian Dan has performed on stage and at festivals all around the world, including New York, Edinburgh and Afghanistan. He is the creator of Sydney sketch club night Comicide, and co-founded the long running Sydney improv show Full Body Contact No Love Tennis, and the live satirical smash hit radio program A Rational Fear (FBi Radio / ABC RN).

In 2014 Dan raised over $50000 through crowdfunding to make A Rational Fear into webseries. The digital season was so successful that A Rational Fear partnered with The Guardian Australia, and went on to sell out two shows at the Sydney Opera house and be nominated in that year’s Walkely Awards for journalism.  He is currently a judge for the 2016 Jacoby-Walkley Scholarship.

Dan’s commitment to causing trouble for a good cause reached fever pitch with his Melbourne Fringe Festival show Beaconsfield: A Musical in A Flat Minor, which chronicled the media exploitation of the Beaconsfield mine disaster. Dan recently told this story to the world on stage at the Sydney Opera House for The Moth Radio Hour.