Recently awarded Victoria Cross recipient Daniel Keighran enlisted in the Australian Army at age 17 and served his country for 11 years. Daniel now wants to share his knowledge and expertise in the corporate sector across areas of leadership, teamwork and safety culture. 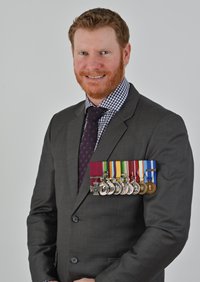 Dan was very professional, he delivered a capturing presentation and made himself available to residents, staff and the community during his visit. Always carrying himself in a well presented professional manner.

Daniel Keighran is an outstanding and inspirational speaker. His recent keynote address to CEO's and executives from across the Sydney Business Community delivered a compelling and insightful journey covering his early childhood growing up in rural Queensland to the battle in Afghanistan where he was awarded the VC. His story is one of inspiration and bravery displaying gallantry above and beyond the call of duty. You could have heard a pin drop in the room during his entire keynote address. Every guest left the room acknowledging how privileged they felt being a part of this special keynote address.

Daniel was amazing, my membership hung onto every word he said and he really was the perfect fit to our program as earlier this morning we had a very moving tribute to honour the ANZAC Centenary.

Insightful, well-articulated and the absolute truth. Easily the keynote speaker of choice. I did notice that he had the entire auditorium hooked on each and every word, from his very first word to the very last word. Daniel's presentation was full of everyday examples and how they can each be used to overcome adversity by each and every one of us.

Recently awarded Victoria Cross recipient Daniel Keighran enlisted in the Australian Army at age 17 and served his country for 11 years. Daniel now wants to share his knowledge and expertise in the corporate sector across areas of leadership, teamwork and safety culture.

Upon graduating from the School of Infantry Daniel was posted to Delta Company, 6th Battalion, Royal Australian Regiment (6RAR) – A Company that is engraved in Australia’s military history for its involvement in Vietnam in the infamous Battle of Long Tan and more recently in Afghanistan with its contribution to the Battle of Derapet, a fierce and deadly firefight that would see Dan earn the Victoria Cross for Australia – The first and only Victoria Cross awarded to a soldier from the Royal Australian Regiment in its proud 66 year history.

Daniel Keighran was born in Nambour, Queensland and grew up in Lowmead a small town approximately 80km from Bundaberg in regional Queensland where his parents bred Paint and Quarter Horses. He enlisted in the Army directly after completing High school on the 5th of December 2000 and completed recruit and infantry training to be posted as a rifleman to 6RAR based at Enoggera in Brisbane all before his 18th Birthday.

He deployed to Rifle Company Butterworth, Malaysia in 2001, on Operational Citadel in East Timor in 2003-04 and again to Rifle Company Butterworth in 2004. In 2005 Dan was promoted to Lance Corporal and then served within Mortar Platoon, Support Company, 6RAR. In 2006 he deployed on Operation Catalyst in Iraq serving as a Bushmaster armoured-vehicle driver, a role he again fulfilled on Operation Slipper in 2007 when he deployed to Afghanistan with the Special Operations Task Group. In 2009 when promoted to Corporal, Dan was posted back to Delta Company, 6RAR.

In February 2010 Dan again deployed on Operation Slipper to Afghanistan, this time with his original Company Delta. On the 24th Aug 2010 his patrol was under fire by a numerically superior insurgent force. After receiving a friendly casualty, Dan Keighran acted on his own initiative to take decisive action to turn the tide of battle. This decision would see him risk his life and purposefully draw enemy fire to himself and away from the rest of the members of his patrol who were treating the casualty. This firefight and Dan’s actions would continue for over three hours. The citation for the Victoria Cross reads ‘For the most conspicuous acts of gallantry and extreme devotion to duty in action in circumstances of great peril’.

In 2011 Dan discharged from full-time Army service and commenced a new career in the mining industry, initially working in exploration drilling throughout Western Australia before finding a place back in the action in a gold mine outside of Kalgoorlie working as an underground shotfirer (blasting). During this time he has stayed true to his Defence roots and continues to serve in the Army Reserves.

Dan has made the transition from an unpredictable high risk environment in Afghanistan to a controlled and calculated high risk environment within the mining industry. He has been able to draw on his experience from combat deployments and combine this with the safety culture that high risk workplaces adopt to become a valuable member of his team. Daniel has delivered presentations to Defence Force training organisations, members of Parliament, and national level conferences.  He also donates his time to a number of community activities and is the Ambassador for the Australian Defence Force Assistance Trust.

Daniel will share with you his experiences of vital leadership and teamwork in critical circumstances, and the importance of effective decision making in pressured environments.

Leadership: Leadership is not just the domain of managers and commanders. The ability to provide purpose, direction and motivation should be encouraged at all levels and is the key to a strong and cohesive team.

Teamwork: “Without the members of my team, I would not be alive today. I knew they would save me if I was shot on the battlefield” – Although differing in nature, Daniel provides a correlation between the significance of teamwork on the battlefield and the corporate environment.

Effective decision making: Poor decision making is often blamed on insufficient time and information. How do you reduce the risk and ensure you have the best information at hand to make a call? By introducing three key factors to any planning process. Remember the worst decision to make is to make no decision at all.