IBO Cruiserweight champion, Danny "The Green Machine" Green is an Australian professional boxing icon. Hailing from Western Australia, Danny is an international boxing sensation with a plethora of titles to his name, earning him a place in boxing history as a four time, two weight division world champion and an inductee into the Australian Boxing Hall of Fame. 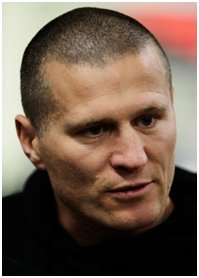 Born in Perth, this humble Scarborough Beach larikan was passionate about kick boxing and martial arts as a teenager. He took up boxing at the late age of 18 and soon developed a reputation as a knockout puncher during his very first amateur fight in 1992 when he knocked out a more experienced opponent in the West Australian amateurs.

Displaying a frightening ferocity and explosiveness in the ring, Danny achieved his goals as an amateur by winning various state, national and oceanic titles, all the while remaining affable and easy going outside the ring.

This led to him being selected for an Australian Institute of Sport scholarship and subsequently competing in the 1998 Commonwealth Games and the 2000 Summer Olympics in Sydney, the pinnacle of his amateur career.

After the Olympics, Danny turned professional under former three-time world champion Jeff Fenech, winning his first 16 fights by knock out. He was controversially disqualified in his next bout in Germany, his 2003 shot at the WBC super middleweight crown against Markus Beyer. Danny overcame the disappointment to destroy former champion, Canada's Eric Lucas in Montreal, for the WBC Interim Super Middleweight World Title in 6 rounds. He later lost the world title in his rematch with Beyer in 2005.

Determined to regain the crown, Danny formed a new team and set up the fight against the outspoken Anthony Mundine. This turned out to be the biggest fight ever in Australian history and the highest grossing fight in the super middleweight division in world boxing history. Unfortunately, Danny lost on points but won many new fans with the dignified and respectful manner in which he accepted defeat.

Danny's resilience and self-belief came to the fore when he made the long overdue jump in weight to the light heavy division, knocking out three top 15 world-ranked opponents to set up his dream fight - the WBA Light Heavyweight World Title in Perth. He dominated the champion Stipe Drews to claim the title and once again enter the history books. Adding to the euphoria six days later, Danny's wife Nina gave birth to their son Archie, joining his sister Chloe.

With the world at his feet, Green rocked the Australian public by retiring as world champion on Easter Sunday in 2008. His retirement was short lived however, and Danny continued with his boxing career, meeting Julio Cesar Dominguez in 2009 to win a TKO decision described as patient, clinical and dominating. This claimed him the IBO Cruiserweight World Title. He put this title on the line against eight-time world champion Roy Jones Jr later that year, stopping the fight two minutes and two seconds into the first round with a flurry of blows against the ropes. He successfully defended his title against Manny Siaca, Paul Briggs (in a controversial collapse), BJ Flores, Antonio Tarver, before two TKO losses to Antonio Tarver and more recently a hard-fought TKO loss to WBC World Cruiserweight Champion Krzysztof Wlodarczyk (46-2-1, 36 KOs) at Challenge Stadium in Perth in November 2011. Unperterbed, he defeated Danny Santiago in his first fight of 2012 before reclaiming the IBO Cruiserweight Title in November against Shane Cameron in a unanimous decision win.

An eloquent speaker, Danny Green has some amazing stories to tell about his life choices, the heartbreaking setbacks he has overcome and the almighty sacrifices he has made to become a world champion in the most brutal of sports . He is charismatic and still the larikan, with a wealth of experiences to share and stories to tell, including being locked in a cage with six lions and surfing alonside a shark! Danny Green is a gifted and natural speaker who will leave audiences feeling inspired.
Subscribe
© 2022 Platinum Speakers