Print
Dave O’Neil is without doubt one of the most popular, and versatile performers in the country. His observational humour and genuine humility have made him a much sought after MC and stand up comedian. 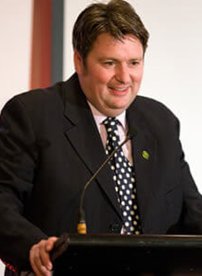 “An atmosphere some comedians would kill to be able to generate, sitting in Dave O’Neil’s audience is genuinely to feel like you’ve stumbled into a relaxed conversation among friends… there’s an engaging affability… unprepossessingly good-spirited fun.” Chortle  “One of our most accomplished stand-ups”

“Dave was sensational. His material was great, he was witty, engaging and had everyone roaring with laughter.”

“In true Aussie style, he comes across as a laidback friend… the difference is he’s so clever he can handle any topic and gets away with everything.”

Dave, read the room very well, he was funny and just on the border of rude, he managed that flawlessly on the night.

Dave was the best MC & Comedy Spot I’ve had at any of my events.

Dave was excellent.  A true, very funny professional who handled the crowd, timing and delivery of the National Print Awards perfectly.  I would have no hesitation in using Dave for this event, or any other for that matter, in the future.

Great MC & comedian.  Kept the audience engaged and entertained the whole evening. Easy to work with.  A big thank you Dave!

Dave O’Neil’s friendly, easy going manner, sharp and witty humour has made him one of Australia's most popular and versatile comics.

Through 30 years on the Australian scene, he has presented shows in EIGHTEEN Melbourne Comedy Festivals and worked at the Comedy Club, Last Laugh, the Comedy Store in Sydney and the Sit Down Comedy club in Brisbane.

His 2017 Comedy Festival show "The Summer of ‘82’ sold out every night of the entire festival, and his 2015 show "Not Cool" was one of the local picks of the Festival.

As well as his stand up career, Dave is a skilled radio broadcaster, and has been a part of successful teams on Nova 100 (with Kate Langbroek and Dave Hughes), Vega 91.5/Classic Rock FM (with Sean Micallef, Denise Scott, Chrissie Swan and Ian ‘Dicko’ Dickson), and most recently on 774 ABC Radio in Melbourne.

Dave was a regular part of successful TV shows such as Spicks and Specks (he holds the honour of being the guest with the most appearances at 49) and Good News Week, and more recently in Adam Hills in Gordon St Tonight.

Dave has been brushing up his trivia skills to take on the role of Team Captain in the ABC TV comedy quiz show, Tractor Monkeys, reflecting on the amazing footage housed in Aunty’s archives. Dave has also been dishing out life advice in The Agony of Life on ABC TV. He has written several books, including Everything Tastes Better Crumbed… and other BIG Statements, has written and acted in films (even starring alongside Eric Bana), and contributed to numerous sketch comedy shows.

Dave O’Neil is without doubt one of the most popular, and versatile performers in the country. His observational humour and genuine humility have made him a much sought after MC and stand up comedian.