David Schwarz nicknamed 'The Ox'  is an entertaining speaker with his presentations  peppered with anecdotes of great highs and crumbling lows. 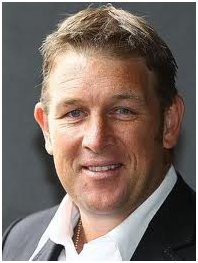 David blew the audience away with his humility and passion. David spoke on team building and what happens when even one member of a team, marches to the beat of their own drum - it brings the whole group undone ... The audience was visibly moved by this giant of a man, who can now look back on his years of football and gambling, as one continuous roller-coaster and who is now in a great place in his life. Comments from attendees included "Best speaker I have ever heard!”

A great speaker, David spoke really clearly and articulated his points very well. He was able to relate perfectly to our group as athletes/players.

David was very popular with our audience at the Industry Forum. Many people were talking about how great a speaker he was and his story was very interesting. People were raving about him

David really related well to the demographic and made a definite connection.

I just wanted you to know how well David's presentation went today, and he spoke with such deep felt emotion. He was brilliant and inspirational. They said he is the best speaker they have had at the annual Men's Health Lunch.

David Schwarz travels from VIC
Fee Range: Up to $5000

David Schwarz is a former AFL player and reformed gambling addict. During his playing days he lived on adrenaline and hope. But he eventually had to face the reality that this lifestyle was not a life. David was at the top of his game with the Melbourne Football Club, when a pre-season injury sidelined him for over two years. In that time David endured three knee reconstructions, but testament to his character he returned to the game he loved, albeit with a new nickname - The Ox - due to his increased size.

His brilliance in the forward line enabled him to win the club's 1999 Best and Fairest award as well as play a key role in getting his team to the 2000 Grand Final. He played 173 games and is now a life member at Melbourne.

Soon after finishing football David was forced to acknowledge that he is addicted to gambling. He was crippled by debt, being chased by the banks and by the bookies. Cent by cent he has worked to pay off every loan and build a brighter future for his wife and two children.

Since giving up the punt David has become a responsible gambling ambassador for Australian Leisure and Hospitality group and a popular personality on Melbourne radio.

The depths of his addiction are explored in his book All Bets Are Off, which was released in 2010. Currently David is an ambassador for Callaway Golf and Hyundai.

During his playing days David dabbled in the media with Triple M, but since retiring he has worked at Melbourne's only sport radio station 1116 SEN calling the football and co-hosting the drive program, The Run Home, from 4 to 7pm weekdays. In the last 12 months this show achieved the highest ratings in the history of the station and the highest in Melbourne for the demographic of males aged 25 to 54, the station's target market.

David also puts his spin on the weekly AFL rumblings with his column in the Geelong Advertiser. In January 2012 the David Schwarz Program won the International Gaming Award for Best Responsible Gambling Program at an award ceremony in London. David continues this work as an ambassador for Responsible Gambling Awareness Week held each year in May and has given talks to Cricket Australia, many AFL and NRL clubs as well as schools nationwide about his journey.

His speeches are peppered with anecdotes of great highs and crumbling lows, and they're always entertaining.