Print
David T. Suzuki PhD, co-founder of the David Suzuki Foundation, is an award-winning scientist, environmentalist and broadcaster. David has received consistently high acclaim for his 30 years of award-winning work in broadcasting, explaining... 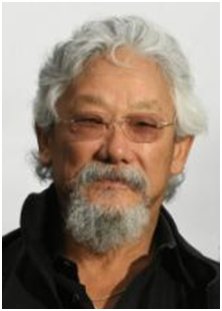 David T. Suzuki PhD, co-founder of the David Suzuki Foundation, is an award-winning scientist, environmentalist and broadcaster.
David has received consistently high acclaim for his 30 years of award-winning work in broadcasting, explaining the complexities of science in a compelling, easily understood way. He is well known to millions as the host of the Canadian Broadcasting Corporation's popular science television series, The Nature of Things.
His eight part series, A Planet for the Taking won an award from the United Nations. His eight-part PBS series The Secret of Life was praised internationally, as was his five-part series The Brain for the Discovery Channel. For CBC Radio he founded the long running radio series, Quirks and Quarks and has presented two influential documentary series on the environment, From Naked Ape to Superspecies and It's a Matter of Survival.
An internationally respected geneticist, David was a full Professor at the University of British Columbia in Vancouver from 1969 until his retirement in 2001. He is professor emeritus with UBC's Sustainable Development Research Institute. From 1969 to 1972 he was the recipient of the prestigious E.W.R. Steacie Memorial Fellowship Award for the "Outstanding Canadian Research Scientist Under the Age of 35".
He has received numerous awards including the Roger Tory Peterson Award from Harvard University. He is a Companion of the Order of Canada, and a member of the Order of British Columbia. He has received 20 honorary doctorates - 13 from Canada, four from the United States and three from Australia. First Nations people have honoured him with six names, formal adoption by two tribes, and made him an honorary member of the Dehcho First Nations.
The author of 43 books, David Suzuki is recognized as a world leader in sustainable ecology. He lives with his wife, Dr. Tara Cullis, and two daughters in Vancouver.
Subscribe
© 2022 Platinum Speakers