A phenomenal success, Dawn Fraser is Australia’s greatest Olympian. A multi-Olympic and Commonwealth Games Gold Medal winner whose success stretched over fifteen magnificent years in the pool.  Dawn Fraser is truly inspirational and a role model for many upcoming swimmers today. 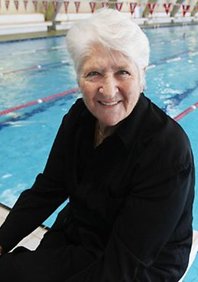 Dawn Fraser’s sporting accomplishments are unlikely to be repeated - in swimming or any other sport. She is an international phenomenon: a multi-Olympic and Commonwealth Games Gold Medal winner whose success stretched over fifteen magnificent years. During her career she broke and held 41 World records and was undefeated over 100 metres freestyle. Dawn has also gone onto publish her Autobiography ‘Dawn One Hell of  a Life’.

Born in the Sydney suburb of Balmain, Dawn is the youngest of eight children from a working-class family. In 1952, her awesome swimming ability was noted by Coach Harry Gallagher, who took over the training of the broad-shouldered teenager and set the 1956 Olympics in her sights.

She has continued to give back to her sport and other sports by being mentor for Able and Disable Australian Olympic Teams since 1988.


Twenty years later Dawn returned to the public life as an independent member of the New South Wales Parliament. She has since maintained an active role in the sporting and wider community as Patron of the Cerebral Palsy Sports Association, the Wheelchair Sports Association of Victoria and of the Ladies Professional Golf Association. Is a Founding Member of the Laureus Sports Academy, a member of the Sport for Good Foundation and Vice President of the World Association of Olympic Winners, while continuing to support sporting clubs across the country. She is also a member of the NSW Sports Advisory Board and is a Director of the Wests Tigers Football Club, Balmain Leagues Club and Balmain Football Club.

At the 1996 Atlanta Olympic Games Opening Ceremony, Dawn was honoured by the Atlanta Olympic Organising Committee as one of seven greatest athletes of all time and also carried the Olympic torch on its way to the main stadium.

At the 2000 Sydney Olympic Games, Juan Antonio Samaranch, President of the International Olympic Committee made Dawn, First Lady of the Olympic games partnering him to the Opening Ceremony in which she was one of seven Australian women to run with the Torch in the main Stadium. She also was the Attaché to the Australian Olympic Team in 2000. She remains one of Australia’s best-loved identities.