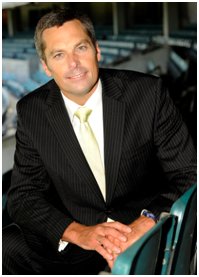 Deane has the knack of inspiring loyalty, passion and optimism in others, which is essential in our competitive industry. When adversity strikes, or when others may procrastinate, he tackles problems head-on and resiliently drives the end result to a winning conclusion. Whenever Deane is involved success is sure to follow.

Deane Pieters travels from WA
Fee Range: Up to $5000

Without a doubt Deane Pieters has built his exemplary executive career on extraordinary achievement as a former freestyle Olympic swimmer.  Deane represented Australia in swimming from1991-1993, competing at the 1992 Olympics in Barcelona.  He is also a former world surf life saving champion (1990), and Australian surf life saving representative (1990, 1991 and 1996).  Deane was a recipient of the Australian Sports Medal in 2000.

From the young age of seven, Deane learnt to set goals and the tough discipline it takes to achieve them.  Applying focus, passion, self-belief, hard work and dedication is the only way to achieve the ultimate dream of representing your country at an elite level and these qualities have been the hallmarks of Deane’s professional career so far.

No one is more focused than Deane on achieving and exceeding performance goals. As a high energy, goal driven senior executive and marketing strategist, Deanne approaches each new business challenge with his built-in flair for creative problem-solving and measured risk-taking to drive consistent bottom-line growth and returns on investment.

Deane’s career which spans more than 15 years in professional and sports administration – has seen him lead marketing and commercial operations in football, cricket and surf life saving with a proven track record in profitability growing business units.  Continuously building upon his broad industry knowledge through consultation and self education is pivotal to Deane’s approach to achieving success in business. He prides himself on nurturing mutually beneficial and long lasting relationships with an extensive network of colleagues, corporate associates, mentors, and industry leaders.

Deane is General Manager of Business Strategy & Growth for the West Coast Eagles Football Club and formerly held the position of General Manager of Marketing from 2001 to 2010.  The West Coast Eagles is Western Australia’s premier sporting club, a leader both-on-and-off the field in the AFL competition. Joining the league in 1987, the team was the first non-Victorian club to win a Premiership with its triumph in 1992 followed by further success in 1994 and 2006.

During his first ten years at the West Coast Eagles, Deane generated revenue in excess of $174 million, negotiated all major commercial transactions, recorded the highest net return of any sporting club in Australia, achieved improved margins, implemented change management across the organisation, and directed major strategic projects and organisational strategy. In the past 12 months, Deane’s biggest achievements have been signing and leading multiple negotiations with key partners valued in excess of $47 million.

Deane has the required skills to lead major strategic projects, having developed the vision for the club’s world class training and administration facility, as a key figurehead on the Joint Football Working Group for the Perth Major Stadium Project at Burswood, having documented the AFL proposal to field stand alone teams in the WAFL competition, and leading organisational strategy and growth from the club’s strong commercial platform.

Deane has built his leadership architect on three principles: people, performance and professionalism, and is driven to get the best out of people. His ability to communicate at all levels of management, treat people right, inspire greatness in others and strive for continuous improvement and innovation are the qualities that have been the trademarks of his leadership approach.

Deane frequently draws on his education and knowledge as a graduate of Stanford Business School, Stanford University (USA).   His commitment to professional development has provided him with the necessary tools to strengthen his skill-set in the areas of strategic thinking, leading people, creating and delivering customer value, strategic change management, and evaluating and managing organisational performance.

Dalton Gooding, Managing Partner of Gooding Partners, and former Chairman of the West Coast Eagles Football Club – distinguishes Deane above other senior executive team leaders by his “dynamic approach to developing a clear vision and articulating it to the board, staff and customers.  Deane has the knack of inspiring loyalty, passion and optimism in others, which is essential in our competitive industry. When adversity strikes, or when others may procrastinate, he tackles problems head-on and resiliently drives the end result to a winning conclusion.  Whenever Deane is involved success is sure to follow”.

A prime example of Deane’s resilience and never-give-up attitude to achieving success is when at the age of 41, he won one of the world’s greatest open water swimming events – the 19.7kms Rottnest Channel Swim in Western Australia in 2010 – after a disappointing loss the year before.

A profoundly effective speaker, nationally acknowledged for his leadership, integrity and ethical vision, Deane offers his audience compelling insights into corporate strategies, marketing and team motivation in an informative, motivating and entertaining style.