Print
Dick Johnson is Australia's most successful Touring Car Drivers. He is a three time winner of Bathurst and five time victor of the Australian Touring Car Championship. Undoubtedly one of the best loved Aussie racing personalities. 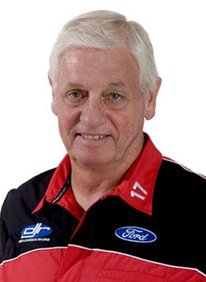 “Excellent. Dick was very interesting and very much enjoyed by all our guests. A fabulous addition to our event.”

“Dick’s presentation targeted our key intent, and that is working as a team to build solid customer relationships.  A wonderful addition to our event, our guests took pleasure in his wit and expertise in the motor industry.”

Our audience absolutely loved having such a legend attend our event. As all participants are Aussie muscle car owners/aficionados they engaged with Dick's stories and felt that he was a great way to end our 8 day adventure.

Highly recommended. Dick was well received by our conference delegates. His after dinner speech was very entertaining. We had many existing fans in the audience, but Dick also made quite a few new ones on the night. We received many favourable comments from delegates and staff who rated Dick as funny, accessible, down-to-earth and just a great bloke! We thank him dearly for taking time from his busy schedule to attend our function.

The audience related really well to his presentation, very friendly and approachable.

Dick Johnson was highly regarded for his exploits on the track and his laconic humour off it, he is a major national sporting personality and one of the most successful touring car drivers in Australian History.

Dick Johnson began racing a Holden FJ in 1964, winning his second ever start, and first came to public notice in 1970 with a sixth place in the Australian Touring Championship race aboard a Holden Torana GTR.

Undoubtedly one of the best loved Aussie race drivers of all time. Even those who were not fans of the blue oval seemed to warm to him in a way never before seen. Johnson found a love for driving as a young child while in the company of his father, and to the casual observer the progression to highly ranked race driver seemed inevitable. But the progression to becoming a three times Bathurst winner was certainly no walk in the park; dedication, commitment, talent and a little luck all play their part.

Dick became a national celebrity in 1980 when, while leading the Bathurst classic, he hit a rock rolled onto the track by a spectator and crashed out of the race. After an enormous flood of sympathy and donations from the Australian public Dick was back at Bathurst and victorious the following year.

Dick is a lively and entertaining speaker who tailors his presentations to the corporate sector.

‘Behind the scenes’ stories and anecdotes of his extraordinary career

Getting to the top and staying there

The Will to Win