Print
Having won a competition on Indian Television, Divya Dhingra’s life certainly changed.  From Bollywood to our own ABC studios, Channel 9, Sky News and Woman’s Day magazine, Divya story is intriguing and inspirational.  Now a sought after MC, host and speaker, Divya sincerity and glamour is brought to each event 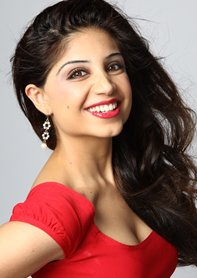 Divya Dhingra travels from NSW
Fee Range: Up to $5000

Divya Dhingra is multi award-winning MC and public speaker who has received international acclaim and is the star attraction of Australian and foreign media. She has experience in hosting on national television, multiple corporate events, state parliament houses as well as mega concerts with over 12,000 people.

Divya's stage hosting capabilities and her art of entertaining and informing the audience with her effervescent personality is highly acclaimed worldwide.

Divya has represented Australia in International Anchor Talent Hunt competition. After exhaustive rounds of eliminations and tough marking, Divya beat all the other contestants to take home the winning crown! The auditions included Judge’s interview round, screen tests, script recitals as well as a written exam.

Divya possesses very high command over languages Hindi, English and Punjabi in both verbal and written aspect. She has extensive experience in hosting both Indian and Australian Bollywood gala events as well as hosting shows and interviewing VIPs (political and entertainment) around the globe.

Divya keeps charity close to her heart. She has been selected as the “Youth Voice” for White Ribbon Day, “Community Ambassador” for Cancer Council Australia and is invited as Guest of Honour at Royal Melbourne Hospital for exclusive cheque ceremonies, where she is privileged to speak on behalf of Australia’s most trusted charitable organisations and make a difference in lives of so many.

Her remarkable achievements, talent and sincerity have made Divya Dhingra an inspiration for many and is renowned to bring glamour to every event with her vivacious nature and true star persona.