Doug Chappel has been a professional comedian for 25 years and is an energetic performer with hilarious facial expressions, astute observation and charm. Headlining Comedy Clubs all over the world, Doug has performed on 5 continents in nearly 20 countries, including England, Ireland, Scotland, the US, Asia and the Middle East 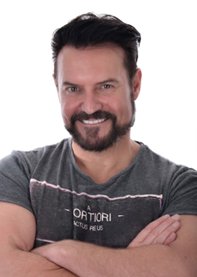 Monash University has had the pleasure of working with Doug over the past two years when delivering Comedy Nights on campus for the student and staff audience. Doug always delivers a professional end to end service and a highly entertaining evening!

“I have had quite a bit of feedback from people who attended and they loved Doug Chappel’s performance. Some of our staff have gone back to their depots and told the ones who did not attend what a great time they had. I am expecting higher numbers next year”.

The Team at Dyer Gippsland Transport

Re: needing a comedian that would be suitable for budget and specific cliental. “We booked Doug Chappel and he was fantastic. We were all very entertained. He was a great addition to our function and provided the crowd with lots of laughs”.

Doug Chappel travels from VIC
Fee Range: Up to $5000

Doug Chappel has been a professional comedian for 25 years and is an energetic performer with hilarious facial expressions, astute observation and charm. Headlining Comedy Clubs all over the world, Doug has performed on 5 continents in nearly 20 countries, including England, Ireland, Scotland, the US, Asia and the Middle East with performances at the exclusive Jongleurs Comedy Club in London and the world-famous Comedy Store.

Regularly touring Australia and overseas, Doug was also selected as one of the few comedians to entertain the Australian Troops during several tours which included shows in East Timor, Solomon Islands, Dubai and Afghanistan. He has also been the feature act on Cruise Ships, had many successful comedy festival shows, serious acting roles in Australian dramas, top 10 music video clips, and has appeared on TV shows such as Stingers, Channel  7’s Good Friday Appeal, Stand Up Australia, The Insiders, The Project,  Offspring, A Current Affair & The Comedy Channel.

Doug has also worked with some of the world best comedians, which have included Kathy Griffin (US), Barry Hilton (South Africa), Bret Ernst (US), Pauly Shore (US), and US superstar Chris Rock.

Doug starred in the Australian movie ‘The Reunion’ which is being filmed on location in Melbourne & Hong Kong, and has also had major roles in ‘My Brothers Rage’ and ‘The Groomeless Bride’; with a special cameo appearance in the award winning film ‘The Heckler’.

Some of Doug’s performances include:

Performing for the troops in Afghanistan, East Timor, Dubai, and the Solomon islands

Performing live in front of 45,000 people at Etihad Stadium

Performing in indigenous communities and schools in outback Australia

Headlining a UK tour that included sellout shows in London, Ireland, and Scotland

Performing for a national audience on numerous TV programs

Headlining all the major Comedy venues throughout Australia

Stand up comedy and/or MC for a variety of gigs such as; Corporate, sportsman’s nights, universities, parties, comedy clubs, hotels, weddings and RSLs.

A motivational speaker (talking about being homeless and growing up around criminality, becoming a comedian, working as a youth worker and a counsellor, finding alternative pathways to getting into university and finally getting several degrees)

Doug has degrees in Psychology, Youth Work, Counselling and Science, obtaining a Bachelor of Science (Honours), Bachelor of the Arts (Youth Studies), Post Graduate Degree in Psychology, Master of Counselling and a Master of Psychology from Monash University. Doug was also awarded the Golden Key award for academic excellence for averaging High Distinctions and class 1 Honours and placing in the top 15% of his university.

Doug also has a diploma of Youth Work, Cert IV in Alcohol and Other Drugs, Cert IV in Training and Assessing, and a Cert IV in Community Services, and has been employed as a youth worker/counsellor for disadvantaged youth and has worked as a Psychologist within the prison system.

Doug is also the ambassador for the Salvation Army’s Lead Tennant organization that supports homeless youth.