Dr Harry Cooper OAM is known as Australia's favourite vet and is famous all around Australia, loved by millions of TV viewers and once voted the fifth most trustworthy Australian.  Since 2004, Dr Harry has been part of the experienced and well respected Better Homes and Gardens team giving viewers advice on their pets as well as his familiar house calls. 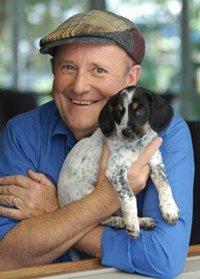 Dr Harry Cooper OAM is known as Australia's favourite vet and is famous all around Australia, loved by millions of TV viewers and once voted the fifth most trustworthy Australian.

Dr Harry has been associated with the Seven Network for more almost 30 years. Dr Harry first appeared as host of Talk to the Animals in 1993 and was host of Harry’s Practice from 1997 up until 2003. Since 2004, Dr Harry has been part of the experienced and well respected Better Homes and Gardens team giving viewers advice on their pets as well as his familiar house calls.

Dr Harry is a typical country vet - living in Central NSW, with his wife Janine, daughter Heidi, and an extended family of four-footed and winged creatures.

Born and raised in Sydney, Dr Harry graduated with second class honours from Sydney University's Faculty of Veterinary Science in December 1965, aged 21. He practised for several years at the Gladesville Animal Hospital in NSW before venturing to the United Kingdom with his first wife to work as a locum in Wiltshire, for six months.

In 1980, he set up his own practice in Annangrove, NSW - still specialising in greyhounds and cage birds. Five years later, in June, 1985, Dr Harry married Janine and their daughter Heidi was born in May 1986.

Dr Harry began his media career on breakfast television as the vet expert on a local Sydney chat show. He also had a spot on Don Burke's radio program, and in 1987 joined Don on Burke's Backyard.

When Heidi was not quite three, Harry and Janine packed up their Sydney home and menagerie and moved to Mole Creek in Tasmania. They arrived on the Apple Isle on Anzac Day, 1989, with 9 horses, 27 cats, 4 dogs, 6 ducks, 3 geese, 80 budgies, and a Major Mitchell Cockatoo. Here he set up his own veterinary clinic in Exton, near Deloraine. The Cooper Family settled on 600 acres, farming 1500 sheep. But with plummeting rural produce prices, they were forced to sell the property in September 1991.

With little left after two years of hard work, they rented for 12 months before moving to Relbia, near Launceston, in October 1992 - where they live today in a beautiful American Tudor house on a hill with 65 acres. A keen gardener, Harry has planted 600 rose bushes, an incredible 1,000 daffodils and 500 conifers as windbreaks. The English style garden covers nearly five acres and includes an orchard.

In 1997, Dr Harry returned to his veterinary rooms to film the first series of Harry's Practice, the Seven Network's family animal program in which he stars with reporter Dr Katrina Warren - and not forgetting his faithful border collie Scarlet. (Sadly in May 2000, Harry's longtime companion Warilla Wind Dark Rose, known affectionately as Rosie, passed away aged eleven years and seven months.)

Dr Harry still uses the black leather vet case which he bought with his second pay in February 1966. (He spent his first pay on a surfboard!)He has had various hobbies over the years from greyhound racing and budgerigar breeding - which earned him the nickname 'Big Budgie' - to judging bird shows, fishing, gardening, and even playing the piano (standing up Jerry Lee Lewis style). He has also found time to write Dr Harry Cooper's Pet Care Guide, which has sold 20,000 copies. In 1999, he released two animal videos Buying and Caring For Your Puppy, and Buying and Caring for Your Kitten which sold out over Christmas. His latest book Anecdotes and Antidotes (Pan Macmillan) is also a hit, already selling 50,000 copies.