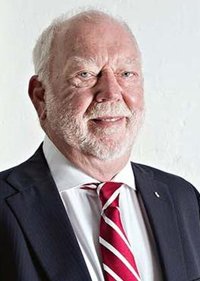 Dr Paul Scully-Power is an integrator, strategist and orthogonal thinker, and is Australia’s first astronaut.

He has a unique international background in Industry, Government, and Academia in the US, UK, Australia, and NZ, and is well known for his network of people and institutions around the world

He flew on Space Shuttle Challenger’s sixth flight (and the 13th flight of NASA’s Space Shuttle program). He has extensive experience in industry, government and academia in the United States, the United Kingdom, Australia and New Zealand. Dr Scully-Power has broad expertise in defence, national security and intelligence, aviation and aerospace, remote sensing, cybersecurity and systems analysis.

He was Chair of Australia’s Civil Aviation Safety Authority, Chancellor of Bond University and inaugural chair of the Queensland Science and Technology Council.  Dr Scully-Power was a councillor of the Australian Institute of Company Directors and a Director of the Australian Trade and Investment Commission.

Dr Scully-Power earned a Doctor of Science in Applied Mathematics from the University of Sydney. He graduated with a Bachelor of Science (Honours) in 1966 and completed a Diploma of Education in 1967.

Dr Scully-Power has published more than 90 international scientific reports and journal articles, including the Royal Society’s Bakerian Lecture. He is a Fellow of the Royal Aeronautical Society, Liveryman of the Honourable Company of Air Pilots, Freeman of the City of London, Fellow of the Australian Institute of Company Directors, Senior Fellow of the International Strategic Studies Association in Washington, DC and a life member of the Space Industry Association of Australia.

His awards include the Distinguished Service Medal from the United States Navy, the NASA Space Flight Medal, the FW (Casey) Baldwin Award from the Canadian Aeronautics and Space Institute, United States Presidential Letter of Appreciation, US Congressional Certificate of Merit, United Nations Association Distinguished Service Award and Australia’s highest aviation award, the Oswald Watt Gold Medal. He is a Member of the Order of Australia.

From 2011 to 2015, Dr Scully-Power was a senior advisor to the United States Government in Washington, DC. Now back in Australia, he is the NSW Space Industry Ambassador. He serves on the defence external review board, the NSW Smart Sensing Network board and on the advisory boards of the Royal Flying Doctor Service of Australia and the Water Initiative for Africa.

Dr Scully-Power has been notably involved with the UTS School of Software. He initiated collaboration between UTS's Centre for Artificial Intelligence and The Ripper Group (drones for the saving of lives), which he co-founded, developing the world-first SharkSpotter, an artificially intelligent shark detection system. He has also mentored research staff and students.

Dr Scully-Power is a world leader in his field. His contributions to the areas of defence, security, aviation, aerospace and remote sensing have shaped the way of thinking in these fields.