Print
Dr Richard Hames – Founding Partner at Hames McGregor + Partners, Chairman of the Asian Foresight Institute, an elected Fellow of the World Academy of Art & Science, and a personal mentor to Heads of State, CEOs and entrepreneurs - is one of our most distinguished futurists. 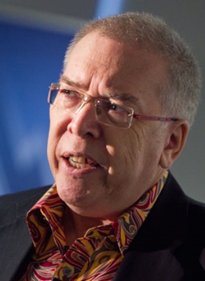 Richard Hames has challenged us beyond the boundaries of our comfort zones. Remarkable and provocative thinking.

Richard Hames has, in a very significant way, helped us to reshape the Australian Taxation Office and lay the foundations for a new organization that is now so essential as we move into a huge tax reform process.

Entertaining, exciting and unforgettable. A formidable intellect at play.

Over the years I have heard many of the world's top speakers and presenters. Richard rates up there with the best. His performance was inspiring, proactive, groundbreaking and most of all very real!

Richard's capacity to identify and weave together the major issues that are shaping our future world is extraordinary.

Richard's compelling summary of the issues facing the world today and his clear view of the dynamics of change is so sharp that it penetrates the fog of the dominant economic paradigm.

In 1998 he warned of the probability of hijacked planes being flown into the World Trade Centre. In 2005 he described to a group of Wall Street bankers the patterns that would lead to a global financial crisis just three years later. In January 2015 he correctly predicted the election of Donald Trump in the US federal election. He was among the first to anticipate the success of Apple’s first iPod and Tesla electric cars. He also anticipated the socio-political conditions that eventually led to the Arab Spring and the release of Burma’s pro-democracy leader Aung San Suu Kyi.

He is now predicting the collapse of capitalism as we know it. Based purely on performance, Dr Richard Hames – Founding Partner at Hames McGregor + Partners, Chairman of the Asian Foresight Institute, an elected Fellow of the World Academy of Art & Science, and a personal mentor to Heads of State, CEOs and entrepreneurs - is one of our most distinguished futurists.

Described by Forbes Asia as “one of the smartest people on the planet” Richard is among the world’s most influential thinkers. Constantly sought after by govermnets and business for his remarkable accurate insights, Richard provides his audience with deep intelligence on a range of issues concerning the future of humanity.

An Australian citizen, educated in Europe and domiciled in Asia, Richard has been honoured with numerous awards. A compelling speaker and the author of six books, Richard is CEO of Centre for the Future - a unique international enterprise whose mission is to make the world work for everyone by designing alternatives to systems that are failing the human family. Eight months ago he co-founded MiVote [www.mivote.org.au] which is already one of the hottest socio-political movements in the world, and he is the strategic mentor behind River simple’s hydrogen economy activities in the UK.

As a foresight practitioner Richard and his team have examined hundreds of topics, ranging from the future of conflict and work to taxation, business and society, food security, international terrorism, smart cities, financial services, health care, science and alternative energy.

NEXT: The Future of Everything

The Five Literacies of Global Leadership

Changing your Organisation for the Better

Giving You The Jitters! Questions you never thought to ask about life & work

The Next Industrial Revolution: Reinvention and Innovation in the 21st Century

Justice on Trial: Power & terror in the 21st Century

Is This Industry Sustainable? The future of oil - and other fictions

The Future of ECOnomics - towards new forms of capitalism

Banking on the Future: The future of financial services

The Obama Code: Why Barack Obama speaks to all Americans and what it means for climate policy

Hydrogen or Hybrid: The future of personal urban transportation

The Truth is Not Enough: Reviewing the need for new climate change policies

The Future of Business & The Business of the Future

The Five Literacies of Global Leadership

The Implications of NEXT Technologies

The Future of Science & Agriculture: Investment patterns and social impact

The Future of Technology-Enabled Solutions in Finance

Amusing Ourselves to Death: The future of work and play