Duncan Armstrong OAM is an Olympic Gold Medalist, media commentator and corporate speaker. He's been Young Australian of the Year, has received an Order of Australia Medal and has successfully inspired countless others to achieve their highest corporate and personal goals.  Part underdog, part larrikin, part businessman his presentations are unforgettable. 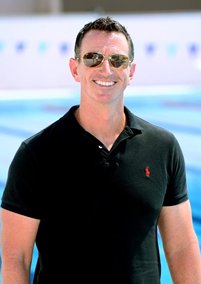 Excellent…. Duncan not only attended our golf day but also acted as MC for the dinner and interviewed the other athletes in attendance. Feedback was excellent. He changes very easily between one-on-one and MC personas...he is very warm and approachable - perfect for the sort of day we were having which was a golf day where we wanted the athletes to mix with senior executives from our customers. He is obviously passionate about sport and made a terrific contribution to our day.

Senior Management were extremely pleased with Duncan's presentation. He engaged the audience with his easy humour and stories. Duncan also delivered the key messages we wanted the audience to leave the dinner with.

Duncan was very well received by my team. He was most professional and delivered clear and relevant messaging around personal motivation and self direction, and the value of learning and listening to those people who are admired and successful in one’s chosen field. Duncan’s high energy and entertaining manner was just right and the perfect closure to our national team meeting at the Gold Coast!

He was so inspiring and our internal evaluation feedback was a sincere positive from staff with his performance – he was actually quite comical and uplifting.

Duncan Armstrong OAM is an Olympic Gold Medallist, media commentator and corporate speaker. He's been Young Australian of the Year, has received an Order of Australia Medal and has successfully inspired countless others to achieve their highest corporate and personal goals.

Part underdog, part larrikin, part businessman - there's something about Duncan that appeals to almost everybody. Whether he's commentating, speaking at an intimate stakeholder's luncheon, or for a company wide function, his presentations are unforgettable.

Duncan Armstrong approaches everything with the same zestful attitude - the very one that helped him win gold at the Seoul Olympics ... and has inspired countless others to achieve their highest corporate and personal goals. Raised in the Central Queensland town of Rockhampton, Duncan Armstrong rose to national and international fame at the Seoul Olympics in 1988 when he broke the world record to win the Gold medal in the 200 metres freestyle.

During his stellar career Duncan also won a host of honours out of the water, including Young Australian of the Year and an Order of Australia Medal. After representing Australia at two Olympic Games, Duncan retired from the pool in 1993 to pursue a career in media and corporate coaching. Duncan is currently contracted with Fox Sports and presents all their swimming coverage, as well as hosts Fox Sports Central on Sundays. Athens 2004 was Duncan's third Olympics as a commentator, where he brought all the action from poolside with Radio 2GB.

Duncan Armstrong faces each year with his usual energetic youthfulness, and promises to deliver on every facet of his career. Media commitments will keep him well and truly in the limelight, while he continues to develop great corporate and community programs with his long-term business partners Westpac Banking Corporation and Telstra.

"Success doesn't just happen - you have to work hard for it'" says Duncan. "My career in swimming taught me that success is a process. "Whether success is defined as a long-term corporate partnership, a positive media image or clients who themselves learn how to succeed, Duncan applies his success-oriented attitude to all areas in his life. As a result, success is achieved twice over. Duncan's attitude makes him work hard to achieve the goals set with his clients and ensure a positive outcome - and happy clients.

And it is this same attitude, coupled with his enthusiasm and zest, which enables Duncan Armstrong to inspire people of all ages and professions to strive to achieve their own personal and corporate success. "People have to learn how to succeed," Duncan says. "Part of my job is to teach them."

Duncan Armstrong is an excellent keynote speaker and is in high demand as a corporate host and MC.

Humorous and entertaining stories from the pool deck