Print
As a writer, comedian, singer, television and radio presenter, conference speaker and MC Em Rusciano is one of the most well-rounded and talented performers in Australia. Em is a mother of two who is one of Australia's most prominent Mental Health advocates following her postnatal depression. 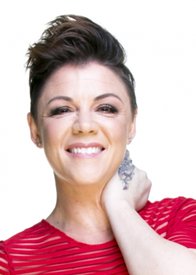 Em was absolutely amazing. We cannot say enough good things about her. I really believe she reached every single one of our audience with her story and her personality. We had quite a lot of ladies comment that they could relate to Em's situation and I am sure we have changed a lot of people's lives for the better. We are receiving feedback already as to when we are having it again next year and who we will have as a guest!

Em delivered above and beyond expectations once again. She is just wonderful.

Rusciano delivers some of the best written, outrageously funny comedy I’ve ever witnessed with near perfect precision.

Em was absolutely fantastic She was very professional. We could not have wished for a better response.

As a writer, comedian, singer, television and radio presenter, conference speaker and MC Em Rusciano is one of the most well-rounded and talented performers in Australia. Em is a mother of two who is one of Australia's most prominent Mental Health advocates following her postnatal depression.

After belting out tunes in the privacy of her shower in her early twenties, Em auditioned for Australian Idol. She made the Top Ten finalists during the show's hugely popular second season, and her star began to ascend. In Idol she showed she had more to offer than solely as a singer, and the media across Australia took note.

First cab off the rank was Austereo who snapped her up to host Perth's top rating 92.9 breakfast radio show. During her time in the west Em interviewed Prime Ministers, traded baby-stories with suburban mums and jammed with the Black Eyed Peas. She riffed on everything from US politics, to post-natal depression to Lady Gaga's man-bits, and drove the Breakfast Show to ratings supremacy, year after year.

Network Ten's The Project noticed Em's special something and hired her as a presenter in 2010, then followed Network Nine's The Circle, and now she is a regular on both Nine and Ten's Morning Shows. Across these she has co-hosted programs, undertaken key interviews, prepared international reports and been a local correspondent presenter.

2011 saw Em write and present her first solo comedy/cabaret show The Saintly Bitch Sings. Selling out and grabbing accolades it spurred her to continue down the live performance path. She then wrote and produced Em Rusciano - The Musical and presented it as her debut at Melbourne Cabaret Festival. It was a sold out season that also garnered her a Green Room Award nomination along the way.

2013 saw her present her debut show at Melbourne International Comedy Festival, and what a debut it was! Puberty Rhythm and Blues was a total sell out, had extra shows added to its run, also grabbing rave reviews from the broad entertainment media. She also featured in prestigious showcase shows - and Em Rusciano had "arrived" on the live scene in Australia. In 2015 Em sold out her entire runs at the Adelaide Fringe and Melbourne International Comedy Festivals before her seasons even opened, resulting in "by demand"additional shows in both capitals.

As a writer Em also contributes to Mama Mia, TV Week, The Herald Sun, Cosmopolitan and various other news websites. Her primary writing role is contributing weekly for the immensely popular news.com.au. Her columns have a huge cult following attracting hundreds of thousands of hits. This in combination with her traditional media activity have led to Em growing a huge and loyal social media following. To date her followers number in excess of 180,000, with a consistent, phenomenal Facebook engagement and reach of millions per week. Her always amusing Twitter posts saw her crowned "Queen of Twitter" in Pedestrian TV's 2014 Blogster awards.

Em talks about Mental Health and Happiness in the workplace. This uniquely stirring and inspiring keynote address encompasses her own life experiences. Em experienced postnatal depression after the birth of her second child when, rather than the elation she felt after her first pregnancy, she had trouble bonding with her baby.

"I went to work, I did the radio show, and then I went to the hospital, and I gave birth. I was looking at the birth as something I had just to get through, get it done, spend a week getting over it, and then just get straight back in to life as though nothing had happened."

Em said the assistance and support she received after the diagnosis helped her realise that she was going to be okay as postnatal depression could be treated and fixed. Em is now passionate beyondblue ambassador. Em has addressed many and varied organisations across the country - from boards of directors to a roomful of miners to a bunch of school kids in Karatha and always receives heartfelt gratitude and glowing feedback following her presentation.

Mental Health and Happiness in the workplace