Print
South Central Los Angeles is one of the toughest neighbourhoods in America. At the age of 10 Eric Bailey was told that he would die on those very streets. Born with a devastating bone disease in both knees, with no access to advanced medical... 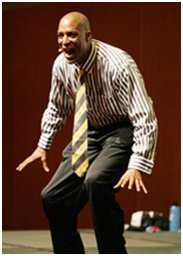 South Central Los Angeles is one of the toughest neighbourhoods in America. At the age of 10 Eric Bailey was told that he would die on those very streets. Born with a devastating bone disease in both knees, with no access to advanced medical services to correct the problem, he faced incredible odds to elevate himself to a brighter future. Each day he was forced to deal with racism, drug infested surroundings, gang violence, low socio-economic conditions, and a tough school system.


The turning point came at age 14 when Eric began to plan his future. Not by saying, but by doing. Eric trained every morning and studied every evening. He tried out for the school basketball team and went on to take his team to its first and only state championship.
Eric Bailey planned, was persistent, and had passion. As a result of those three ingredients he received a basketball scholarship to Boise State University and graduated with a bachelor in marketing and communications.
In 1982 Eric Bailey moved to Australia to play basketball in the National Basketball League. He played with the Hobart Devils, Melbourne Tigers, and Gold Coast Rollers. During that time he worked in many customer driven businesses such as sales, promotions, fitness, media, marketing, basketball coaching, and health industries.
After retiring from basketball Eric Bailey decided to direct his passion into motivating and activating people. One of his first roles was to host the NBA ALL STAR Weekend Jam Session, becoming the first person to be brought in from outside the USA. At this particular event he was able to combine his communication skills, marketing, sport, and energy to actively energise more than 100,000 people over a three day weekend.
Eric Bailey is now one of the most sought after motivational speakers in the world and has worked hand in hand with the big names of sport and entertainment. His story will move you, his determination will motivate you and his success will inspire you.

1. Vision Personal and organizational. Learn what vision is, why it is essential, and how to harness its power.
2. Attitude Develop the attitude to enable success. Realize the importance of both mental focus and emotional fuel. Find out how to use them together.
3. Synergy Understand how no person exists in isolation. Discover how organizational synergy is a force multiplier for effectiveness.
4. Leadership True leadership does more than just inspire – it transforms! Learn to consistently bring out the best in your team.
5. Activation Get switched on from the inside. Find out how to fuel passion in yourself and in others.
Subscribe
© 2022 Platinum Speakers