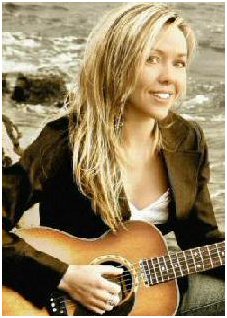 Golden Guitar Winner x 2
CMAA Independent Entertainer Of The Year x 2
Mo Award Winner x 3
ACE Award Winner x 2
Aus CM People’s Choice Awards Winner x 2
There’s no trace of a Big Black Cloud hovering over superb singer-songwriter Felicity Urquhart with her taking home the 2007 CMAA Australian CM Awards Video Clip of the Year with her single Big Black Cloud. Directed by Glenn Wilson, from the album produced by Glen Hannah, Felicity co-wrote the song with American hitmaker and Grammy award winning producer, Randy Scruggs.
Felicity was also nominated at the Golden Guitar Awards with berths for Album of the Year for MY LIFE and Female Artist of the Year for her hit single, Big Black Cloud.
The winning streak continued with Felicity Urquhart also being named the 2007 Australian CM People’s Choice Awards Female Vocalist of the Year, voted by the public. Both announcements completed an amazing twelve months for Felicity. 2006 was certainly a landmark in Felicity’s career, consolidating her name as one of the finest and most hard-working artists in the industry.
To date she has picked up accolades and awards for Best Country Artist at the 2006 Musicoz Awards; Independent Entertainer of the Year at the CMAA Achiever Awards; Female Vocalist, Album, and Single of the Year at the Australian Independent CM Awards and the Australian Songwriters’ Association named her Country Songwriter of the Year.
While 2006 was a stellar year in Felicity’s career, 2007 started with the top accolade of taking home a Golden Guitar – a wonderful achievement for this fabulous entertainer.
Felicity Urquhart sings beautifully with such raw emotion and sincerity, and with her latest album MY LIFE, has emerged as one of Australian music’s most sophisticated artists – it’s a touch of roots and a whole lot of class.
Her musical roots are as true as they come – growing up influenced by country music icons in her hometown of Tamworth – where she set her sights firmly on making music. With performances for the troops in the Solomon Islands, a two month tour of WA with James Blundell, Anne Kirkpatrick and Carter & Carter, and a trip to the US - Felicity has been inspired by her travels and has been busy songwriting.
Felicity’s wide-ranging appeal, helped score her the coveted gig at TV presenter on Channel Seven’s travel program, Sydney Weekender – which serves to keep her schedule busy.
Subscribe
© 2022 Platinum Speakers