Print
Gabriel Gaté is a chef with an international reputation as a cookery author, television presenter and cookery teacher. Gabriel was born in the Loire Valley of France in 1955. Whilst his father grew the family fruit and vegetables and made... 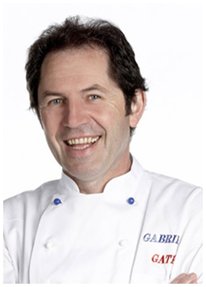 Gabriel Gaté is a chef with an international reputation as a cookery author, television presenter and cookery teacher.
Gabriel was born in the Loire Valley of France in 1955. Whilst his father grew the family fruit and vegetables and made wine from the small family vineyard, his grandmother was an excellent cook and passed on the joys of cooking to her grandson.
Gabriel served his chef's apprenticeship with Albert Augereau, renowned in the Loire Valley as the best chef of the region. Later, Gabriel worked at the famous Paris fish restaurant, Prunier, and with the Savoy Company at the Berkeley Hotel in London.
Following his National Service in Baden-Baden in West Germany, Gabriel cooked with the modern French chef, Alain Senderens, at his celebrated Parisian three-star restaurant.
Gabriel Gate came to Australia in 1977 with his Melbourne-born wife, and has since established himself as one of the leading influences on the way Australians cook today.
As one of the most talented modern cookery show presenters, Gabriel's credits include: Fun in the Kitchen (Channel 7); The Good Food Show (ABC); What's Cooking (Channel 9).
Gabriel Gate has presented cookery segments on many lifestyle programs including Taste Le Tour (SBS Television),Good Morning Australia with Bert Newton (Channel 10), Everybody (ABC Television), Body and Soul (Channel 9). Gabriel won a World Food Media Silver Award in Adelaide in 1999 for best Cooking Segment within a Television Show.
Gabriel is the author of 20 cookbooks. Several have won international awards with sales are over 1 million copies.
Since 2001 Gabriel was selected each year by the Victorian Premier's Department as an Ambassador for the Australia Day celebrations.
On 14 July 2000 (Bastille Day) Gabriel was presented with one of France's highest honours, La Croix de Chevalier dans L'Ordre du Merite Agricole, for his contribution to promoting French gastronomy.
Gabriel Gate is in constant demand to demonstrate his outstanding skills as a chef and speaker.
Subscribe
© 2022 Platinum Speakers