Print
Gemma Tognini is an influential social and political commentator, columnist, writer, broadcaster and award-winning entrepreneur.  The unique road on which she has walked over a 30-year career, makes her a highly relevant and engaging speaker for a range of audiences. Gemma is also a seasoned MC and has appeared on countless panels as both a moderator and presenter at a very senior level. 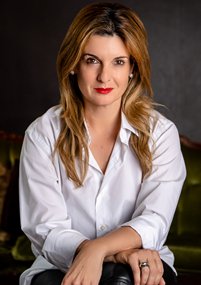 Confident, talented and highly respected by her peers, Gemma has perfected the skill of embracing her audience.

Gemma Tognini was the keynote at our CEDA program opener earlier this year, and she was a dynamic and engaging presenter. You can tell that Gemma speaks directly from the heart, with passion and vitality. An energetic and experienced presenter, strategist and leader, Gemma will leave you inspired and thinking outside of the square.

CEDA - the Committee for Economic Development of Australia

Realmark had the recent pleasure of an energetic and inspiring presentation by Gemma Tognini. She shared her personal story with honestly and sincerity, with reflections that were both encouraging and enlightening. Her passion for life and her business shone through and showed us all how anything we feel or desire in life is achievable. Gemma is a true role model for anyone in business and an inspirational speaker.

Gemma Tognini, participated in the 2012 ANZSLA Conference in an interactive panel discussion about "The public new world of social media". The discussion focussed on the impact of social media on sports – from the perspective of both sports organisations and athletes, and the dangers to reputation and livelihood that can result from misuse of these increasingly public platforms. Gemma was an engaging and entertaining presenter, interacting in a lively and informed fashion with delegates and other panellists.

Gemma is a highly engaging speaker that shares her story in an authentic style. Her ability to articulate the roller coaster career ride, but also champion women in business, energises and inspires her audience.

Gemma Tognini travels from NSW
Fee Range: Up to $5000

Gemma Tognini is a woman whose day to day existence spans both the corporate and media words. An award-winning business owner (Telstra Business Women’s Awards, Business Owner of the year) Gemma runs a boutique corporate communications and reputation consultancy with offices in Sydney and Perth.  She is an opinion columnist with the Australian Newspaper and the West Australian, and regular management contributor with Sky News.

But this is just the start of her story.

Gemma was a senior journalist and Chief of Staff with the Seven Network for a decade. In 2003, wanting her life to look different, she quit her job and armed with a mobile and a $500 computer in her spare room, she started her business, GT Communications.  Nearly two decades later, she and her team have a national footprint of clients across a diverse and dynamic range of industries.  From banks to breweries, privately owned to listed entities, government and not for profit organisations – Gemma is one of the most sought-after strategic advisors in her field.

Gemma divides her time between running her company, which has a global footprint of clients which includes some of Australia’s best known corporate and retail brands, and her career as a forthright, honest, engaging and fearless media commentator.  Gemma drives debates and influences outcomes, writing about issues as diverse as gender pay parity to the challenges faced by working families and, quite literally, everything in between.

Gemma Tognini is an influential social and political commentator, columnist, writer, broadcaster and award-winning entrepreneur.  She is a battled hardened corporate advisor, having steered clients through some of Australia’s most high-profile media storms.  The unique road on which she has walked over a 30-year career, makes her a highly relevant and engaging speaker for a range of audiences.  Gemma is also a seasoned MC and has appeared on countless panels as both a moderator and presenter at a very senior level.

Gemma is a graduate of the Australian Institute of Company Directors and has served as a non-executive director of Surf Life Saving WA, The Salvation Army and the Starlight Children’s Foundation.

Gemma is a highly adaptable speaker and whilst the following offers a broad guide, she prefers to adapt her presentations specifically to client’s brief.

It's a man's world... Or is it? Don’t believe the lies about woman in business.

Making something from nothing -  trading the newsroom for the boardroom

Losing the label – how to ditch your past, embrace the present and build a future

The power of choices -  Building a growth culture in your teams

Social media and the impact on reputation management –

The 24/7 news cycle and you – media and reputation management when the news never sleeps.